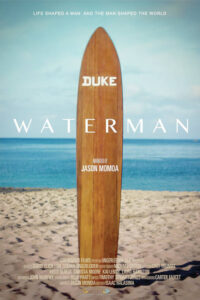 shattered records and brought surfing to the world while overcoming a lifetime of personal challenges. Waterman explores his journey and legacy as a legendary swimmer, trailblazer, and the undisputed father of modern-day surfing. From modest roots in Waikiki, Duke swam his way to fame, becoming the face of a changing Hawaii – and a vital part of its tourism industry – as it evolved from an independent Kingdom to the 50th American state. Yet relatively few outside Hawaii know the full extent of Duke’s impact on sports, lifesaving, and combating prejudice. Through Duke’s incredible athletic

accomplishments, personal doctrine of Aloha, and enduring gift of surfing to the world, the film explores a theme that still resonates today – the role of sports in

breaking societal barriers – and celebrates his triumphs and philosophy of inclusion,  challenging us all to embrace diversity and incorporate Aloha into our own lives. Narrated by Jason Momoa, and directed by Issac Halasima WATERMAN features commentary from surfing’s biggest stars, including newly-crowned Olympic gold medalist Carissa Moore, while also delving into his personal successes, struggles and humanitarianism through rare footage, contemporary visuals and incisive interviews.

About the filmmaker – I edited my first video for broadcast television when I was 13, and decided then, that I didn’t want to do anything else with my life. Fast forward a couple decades, and I’m just a Director / Editor / Writer / Shooter that has done my best to make a dent as a storyteller, in the documentary, commercial, movie, and music video industry. Along my journey, I’ve been gifted with some pretty cool awards, and have been lucky to see a bunch of my videos, in total, reach over 700 million views. My films include; The Last Descent, Imagine Dragons: The Making of Night Visions, and Sole. – Isaac Halasima

About the filmmaker – David C. Ulich is President of the Foundation for Global Sports Development and serves on its Board of Directors. The Foundation for Global Sports Development (GSD) strives to be a leader in the sports community by delivering and supporting initiatives that promote fair play, education and the physical and developmental benefits of sports for youth around the world. The foundation works closely with the International Olympic Committee and a variety of Sports Federations on global programming and outreach efforts including domestic and international grant making, the formation and growth of impactful collaborations and partnerships, youth mentorship, and awards programming that increasingly impact underserved youth. David is a partner of the law firm of Sheppard, Mullin, Richter & Hampton LLP. He also serves on the United States Olympic and Paralympic Foundation’s Council of Trustees and the Southern California Committee for the Olympic Games’ Board of Directors. David holds a LL.M. from New York University, a J.D. from the University of California, Los Angeles, and a B.A. from Haverford College. David was one of the producer of Isaac Hahasima’s Waterman.

“Waterman is a vigorously beautiful and deeply rich exploration of one of America’s most overlooked heroes.” – Maxwelll Rabb, Chicago Reader

“I love that this movie brings him back to the fore, and tells us just what a wonderful man he was.” – Tim Cogshell, FilmWeek (KPCC – NPR Los Angeles)

“We could all learn something from Duke, and his culture, during these divisive times.” – Alex Saveliev, Film Threat

“Duke Paoa Kahanamoku didnt always get the financial and popular success he merited during his lifetime; he deserves a proper tribute, and Waterman absolutely fits the bill.” – Eddie Harrison, film-authority.com

“A grand feel-good remembrance of an epic life, a documentary that could make even non-surfers and haoles swell with tearful pride that the human race ever produced this bronze god who walked among us and changed the world.”  – Roger Moore, Movie Nation