It’s 1984 and outside a small-town nightclub, a group of 8th graders gather, 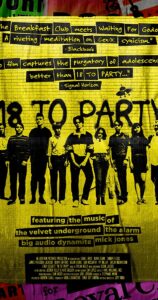 grappling with a spate of recent suicides, UFO sightings, their absentee parents, and each other. 18 TO PARTY spans a single evening in the lives of these kids, but manages to transport us fully to a time when waiting for something to happen felt just as significant as the thing itself. Gorgeously atmospheric, with a pulsating sense of anticipation that steadily builds, the film pulls us into the fears, wounds, and desires of each character, ultimately revealing that hope may arrive from the

last place we expect. The meticulously authentic production design, killer soundtrack, and universally excellent performances recall the spirit of classic 80s teen movies like Stand By Me and The Breakfast Club. 18 TO PARTY is a spot-on love letter to Gen X, awkward teenagers, and the transcendent power of friendship. Director Jeff Roda joins us for a conversation on the universal trials and tribulations of youth, working with a very talented group of actors and the inspiration for his insightful new film.

For news and updates go to: 18topartymovie.com

About the filmmaker: Jeff Roda has written screenplays for DreamWorks, Universal, Paramount Pictures, New Regency, TriStar, and television pilots for HBO, CBS, and Warner Bros. Additionally, he was a producer on the Sony Pictures Classics feature, Love Liza, starring Academy Award winning actors Philip Seymour Hoffman and Kathy Bates. 18 TO PARTY marks his directorial debut. Roda is a local resident of Woodstock area and the film is set in Upstate New York.

“If John Hughes and Richard Linklater had a love child, it would be 18 to Party.” – Sean Boelman. WORLD FILM GEEK

“No film captures the purgatory of adolescence better than 18 to Party which gets its premiere today at the Woodstock Film Festival. Writer/Director Jeff Roda so perfectly captures the tension of this time period I found myself having middle school flashbacks.” – Tyler Unsell, SIGNAL HORIZON

“18 to Party feels like dropping in on an episode of Stranger Things that takes place between seasons.” – Dan Metz, DOWNTOWN MAGAZINE

“18 TO PARTY was an instant time machine back to a time when social media was science fiction, and friendships were flesh and bone instead of 2D digital snaps.” – Matt Mungle, MUNGLE SHOW