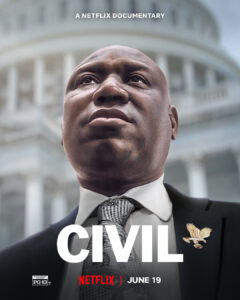 Roger Ross Williams comes the NETFLIX documentary CIVIL/BEN CRUMP. CIVIL is an intimate vérité look at the life of maverick civil rights attorney Ben Crump and his mission to raise the value of Black life in America. CIVIL follows a year in the life of Crump as takes on the civil cases for the families of George Floyd, Breonna Taylor, Black farmers, and “Banking while Black” victims, in doing so challenging America to come to terms with what it owes his clients. Peeling back the many layers of 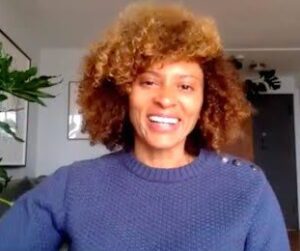 Crump, Hallgren gives a behind-the-scenes look at his upbringing and his balance of work and family life. CIVIL also underscores other countless issues Crump is passionate about including

environmental justice and banking while Black. Director / Cinematographer Nadia Hallgren joins us for a conversation on the profoundly significant role that Ben Crump has taken on, symbolically and practically for the African American community. Hallgren’s multi-layered approach to storytelling provides the viewer with a window into Mr. Crump’s world of rampant state sanctioned carnage, grief counseling and legal triage.

To watch go to: netflix.com/CIVIL

About the filmmaker – Nadia Hallgren is an award-winning filmmaker and cinematographer from The Bronx, New York. She directed the four time Emmy-nominated documentary Becoming (2020) and made history as the first person to receive Emmy nominations for both Outstanding Directing for a Documentary / Nonfiction Program and Outstanding Cinematography for a Nonfiction Program on the same project. In 2019, her documentary short After Maria was shortlisted for an Academy Award. Hallgren won the Special Jury prize at SXSW in 2018 for her independent documentary series She’s The Ticket and a Webby Award for Gavin Grimm Vs. Hallgren has also contributed to such notable feature documentaries as Fahrenheit 9/11, Searching for Sugarman and The Hunting Ground, and she serves on the board of the Bronx Documentary Center, a nonprofit organization dedicated to sharing photography and film with underserved Bronx communities.

“Crump’s nickname is “America’s Black attorney general,” and in a new Netflix documentary, we get to know a little about him.” – G. Allen Johnson, San Francisco Chronicle

“Civil is a chronicle of a proud man who carries a sad history everywhere he goes.” – M.N. Miller, Ready Steady Cut

“We walk away grateful that his clients have an advocate, while wondering if there is any chance at all for this nation to lessen his load.” – Elizabeth Weitzman, TheWrap

“The portraits in “Civil” are allowed to transform from narrow and singular, as frequently depicted by mass media, to vivid and multifaceted.” – Siddhant Adlakha, indieWire