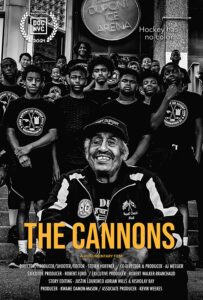 lives of Coach Neal Henderson and his team of young African American hockey players in the longest serving minority hockey program in North America, the Fort Dupont Hockey Cannons in Washington DC. The goal of the Cannons is to provide educational purpose and teach young people discipline, via sports activities, to establish self-esteem, a sense of purpose, and to offer an incentive to excel academically. THE  CANNONS chronicles one pivotal hockey season, following the lives of two Black teenage hockey players and one legendary

coach, in one of America’s toughest neighborhoods: Southeast, Washington DC. Part coming of age story, part social-political commentary on the Black American experience, the film chronicles  the Fort Dupont Cannons, one of America’s only predominately Black

hockey teams, as they must overcome the challenges of life on and off the ice. THE CANNONS is a story about hope; the power of sport; and the pursuit of the American Dream. Co-directors Steven Hoffner and AJ Messier join us for a conversation on the different paths that led them into the lives of Neal Henderson and the remarkable extended family of Cannons’ players, parents, supporters and alums.

For news and screenings go to: thecannonsdocumentary.com

About Coach Neal Henderson – Mentor. Teacher. Coach. Father. Philosopher. Coach Neal is widely recognized in Washington DC as the Godfather of hockey to countless African-American youth. He is responsible for helping to foster and develop young minds as dedicated athletes and engaged students, keeping them in skates and off the streets. He’s not only recognized in his community for his accomplishments, but throughout the country as a torch bearer for the Winter Olympic Games in Salt Lake City, and most recently, as an inductee of the US Hockey Hall of Fame in 2019. Neal has volunteered over 40 years of his life to The Cannons, a legacy that has inspired others to follow in his footsteps.

About the filmmaker – Director/Producer/Shooter/Editor Steven Matthew Hoffner is an award winning producer and director with over almost two decade’s worth of experience working in scripted, documentary, and branded content. After graduating from the University of Toronto in 2006, Steven was hired by the National Hockey League, where he worked as a Features Producer for NHL Studios, creating original documentaries and editorial features. His first half hour documentary Behind the Stripes: A Ref’s Life, debuted on the NHL Network to critical acclaim and helped pioneer the HBO 24/7 series that soon followed. While with the NHL, Steven produced sports and lifestyle content for HBO, NBC, and CBC that registered millions of views and web awards for original series such as NHL Life, Off-Season Workouts, and the Draft Profiles. In 2016 Steven created 383 Pictures and has turned his focus to developing long form scripted and unscripted television content. The feature documentary set in Washington DC titled, “The Cannons” is scheduled for release in 2021; the crime-thriller drama television series Keep Six, as well as other scripted and unscripted projects to be released in 2021 including “Live the Dream” and Georgia”.383pictures.com

About the filmmaker – Co-Director/Producer AJ Messier AJ’s career in photography took shape with his move to Toronto in 2010. As a photographer, he has done work for the NHL, the ROM, Hockey Canada, the Hockey Hall of Fame, and Toronto 2015 Pan Am Games. Some of his work has appeared in such magazines as  Macleans, Sports Illustrated, Sportsnet, the Hockey News and Stand Up Journal.  AJ has since turned his focus to directing and producing, as he co-directed and co-produced the feature documentary “The Cannons” with Steven Hoffner.