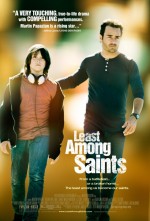 LEAST AMONG SAINTS marks MARTIN PAPAZIAN’S (Writer/Director/Anthony) debut as a feature director and writer. Inspired by true events, the story centers on a man’s quest for redemption through his compassion and service to an orphaned boy. Previously, Papazian directed the award winning short film In The Wind, about a soldier’s return to Katrina-ravaged New Orleans only to discover the place he grew up in has collapsed in his absence. The film was awarded Best Picture at both the New Orleans and Vail Film Festivals as well as being the official selection of numerous other festivals. In the theater, Martin has directed a wide array of plays in Los Angeles. Notably, the Pulitzer Prize winning drama Topdog/Underdog, The Exonderated, Eric Bogosian’s Pounding Nails Into The Floor With My Forehead, Neil Labute’s Autobahn, and the one woman show You Can Eat Me. Martin joins us to talk about his gritty and moving first feature film.