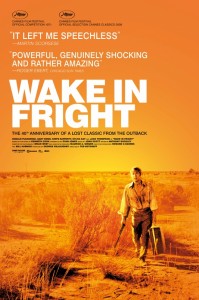 Alongside MAD MAX and WALKABOUT, WAKE IN FRIGHT is widely acknowledged as one of the seminal films in the development of modern Australian cinema. Directed by Ted Kotcheff (FIRST BLOOD) and starring Donald Pleasence (HALLOWEEN, THE GREAT ESCAPE), WAKE IN FRIGHT tells the nightmarish story of a schoolteacher’s (Gary Bond) descent into personal demoralization at the hands of drunken, deranged derelicts while stranded in a small town in outback Australia. Believed to be lost for decades and virtually unseen in America until now, WAKE IN FRIGHT returns fully-restored in stunning HD in what the New York Observer says “may be the greatest Australian film ever made.”

“WAKE IN FRIGHT is a deeply – and I mean deeply – unsettling and disturbing movie. I saw it when it premiered at Cannes in 1971, and it left me speechless. Visually, dramatically, atmospherically and psychologically, it’s beautifully calibrated and it gets under your skin one encounter at a time, right along with the protagonist played by Gary Bond. I’m excited that WAKE IN FRIGHT has been preserved and restored and that it is finally getting the exposure it deserves.” —Martin Scorsese, 2012