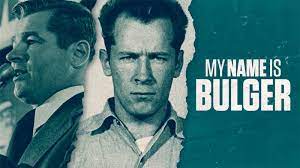 was State Senate President for almost 20 years in Massachusetts. His older brother James ‘Whitey’  Bulger was a Boston gangster who was murdered in prison on October 30th 2018, aged 89.  MY NAME IS BULGER weaves its way through the stories of both brothers and their respective rises and falls. Featuring intimate interviews with family and an exclusive conversation with James Bulger’s girlfriend and partner,

Catherine Greig, the film strips away the hysteria of daily print headlines and nightly news bulletins to unfold the story of a unique American family who crave to be judged for who they are and what they’ve done, not what their infamous relative did. Director Brendan J Byrne (Elian, 66 Days, One Million American Dreams) joins us for a conversation on the breaking through the noise and perceptions that have clouded the Bulger family legacy and how even the story about the most notorious Bulger, James “Whitey” Bulger is not what you may think it is.

About the filmmaker – Brendan J Byrne, Producer/Director, Executive Producer, Hotshot Films Brendan began his filmmaking career in 1992 with an award-winning debut film The Kickhams (1993, C4), an exploration of political identity told through the story of his Gaelic Football team which he played for. This was followed by How Far Home (1998 C4), the story of Gerry Conlon of the Guildford Four for Channel 4’s prestigious ‘Films of Fire’ season. This documentary united individuals from The Birmingham Six, The Bridgewater Three and The Guildford Four for the first time on television and received ‘Pick of The Day’ in 7 national newspapers. In 2000 Brendan produced and directed the critically acclaimed Lines of Fire, a film celebrating the poetry of the Northern Ireland Troubles featuring poets Seamus Heaney, Tom Paulin and Michael Longley together with actors Stephen Rea, Adrian Dunbar, Brid Brennan and Ian McElhinney. Brendan has been a long time collaborator with international auteur John T Davis (Shellshock Rock, Hobo, Dust on the Bible, Power in the Blood) and produced his feature length autobiographical film The Uncle Jack in 1996. Brendan has executive produced over 50 hours of television for BBC Television. In 2005 Brendan was the Irish Producer on The Secret Life of Words, the Pedro Almodovar produced film starring Tim Robbins, Sarah Polley and Julie Christie. For more go to: finepointfilms.com