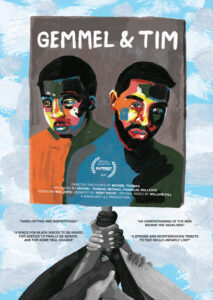 and Timothy Dean, two Black gay men who both died from meth overdoses at the home of West Hollywood politico Ed Buck. Their deaths at the now-infamous apartment sent shockwaves through the LGBTQ+ community. The ensuing media circus cooked up a spicy concoction of sex, drugs, race and politics, but had no appetite for the in-depth human stories of who these individuals truly were valued. GEMMEL & TIM looks at Gemmel and Tim’s parallel walks of life through the eyes of their extended and chosen families –

memories, correspondence, and things they did and didn’t share with each other. Through intimate recollections of their lost friends, each character exposes their own personal journey in dealing with grief. Powerful and galvanizing, Gemmel & Tim simultaneously investigates the crimes and offers a cautionary tale to keep these events from repeating. Director Michiel Thomas joins us for a conversation on cultural, political, and community dynamics that hamstrung the initial investigation and the relentless pursuit of justice by friends and family that eventually brought some semblance of justice for these two young men.

For news and screenings go to: gemmelandtim.com

About the filmmaker – Belgian native Director / Executive Producer / Writer / Co-Editor / Cinematographer Michiel Thomas is a Los Angeles based  documentary filmmaker. His debut Game Face was distributed by Netflix in 2016, screened at more than 50 film festivals worldwide and won 12 awards, including the Audience Award at Frameline 2015. His next feature doc That’s Wild (2020) was sold to PBS and AMC Networks, screened at 30+ film festivals and won 4 awards.