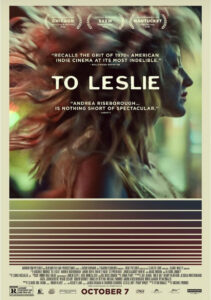 provide for her son (Owen Teague) when she wins the lottery and a chance at a good life. But a few short years later the money is gone and Leslie is on her own, living hard and fast at the bottom of a bottle as she runs from the world of heartbreak she left behind. With her charm running out and with nowhere to go, Leslie is forced to return home to her former friends Nancy and Dutch  (Allison Janney, Stephen Root).  Unwelcome and unwanted by those she wronged, it’s a lonely motel clerk named

Sweeney (Marc Maron) who takes a chance when no one else will. With his support, Leslie comes face to face with the consequences of her actions, a life of regret, and a second chance to make a good life for her and her son. Director Michael Morris joins us for a conversation on his riveting film about a woman in free fall, love and self-loathing, working with an amazing cast, his second project with Andrea Riseborough and Owen Teague and how silence can say so much.

For info and updates go to: momentumpictures.net/to-leslie

In Theaters & On Demand October 7

About the filmmaker – Michael Morris is a British director and producer. His first feature, TO LESLIE, starring Andrea Risborough, Allison Janney, Marc Maron and Owen Teague has been slated to have its world premiere at the 2022 SXSW Film Festival. His most recent series work includes directing the season finale of Extrapolations for Apple TV starring Meryl Streep, Kit Harrington, and Gemma Chan as well as serving as the Executive Producer / Director on the final season of Better Call Saul. Over the last several years he has directed and executive produced the Locke & Key pilot for Netflix, directed multiple episodes of For All Mankind for Apple, Billions and Shameless for Showtime, and Preacher for AMC. He worked exclusively at Netflix for a period directing multiple episodes on some of their most groundbreaking shows including 13 Reasons Why, House of Cards, and Bloodline. Before his work in television, Michael was the Director of The Old Vic, London’s independent not- for-profit theatre.

“Unglamorous and unflinching, lilting from dive bars to motels across an errant desert wind. So too is Riseboroughs performance as Leslie.” – Fran HoepfnerTheWrap

“In To Leslie Riseborough presents the rough and tumble of the films eponymous character with a tender and sensitive rawness and authenticity.” – Alexandra Heller-Nicholas, AWFJ Women on Film

“To Leslie is not the conventional addiction narrative it seems to be. Even when they tee up the expected happy ending, the film goes on for another, crucial, unpredictable beat.” – Jason Bailey, The Playlist

“Riseborough’s performance is nothing short of spectacular. She doesn’t compromise, she doesn’t hold back, but she doesn’t endow the character with any sort of fake flamboyance.” – Owen Gleiberman, Variety

“To be sure, Leslie is her own worst enemy, but she has a disease and there’s still time, maybe just enough time, for her to find the path to recovery. We hold deep hope for that redemption.” – Richard Roeper, Chicago Sun-Times