Andreas Fontana’s AZOR takes us to Argentina, the late 1970s as a private banker 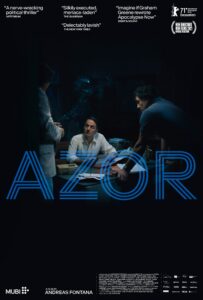 Yvan (Fabrizio Rongione) arrives from Geneva with his wife Ines (Stéphanie Cléau) to replace a colleague who has mysteriously disappeared in military-ruled Buenos Aires. Moving through the smoke-filled lounges and lush gardens of a society under intense surveillance, he finds himself untangling a sinister web of colonialism, high finance, and a nation’s “Dirty War”. In his remarkably assured debut, Swiss director Andreas Fontana invites us into this seductive, moneyed world where political violence simmers just under the surface. Co-written by Argentinian filmmaker Mariano Llinás (La Flor), Azor is a riveting look at international intrigue worthy of John le Carré or Graham Greene. Yvan De Wiel, a private banker from Geneva, is going to Argentina in the midst of a

dictatorship to replace his partner, the object of the most worrying rumours, who disappeared overnight.

Between hushed lounges, swimming pools and gardens under surveillance, a remote duel between two bankers who, despite different methods, are the accomplices of a discreet and merciless form of colonization. AZOR’s director Andreas Fontana joins us for a conversation on the ways in which he dissects this haunting, opaque, seductive world where are little about it is as it seems and where a misstep can cost those who choose to live in it their life.

For more go to: mubi.com/films/azor

To watch go to: alinafilm.com/azor

For more on the streaming service MUBI or mubi.com/youtube

About the filmmaker – Andreas Fontana was born in Geneva in 1982. After completing his MA in Comparative Literature at the University of Geneva, he moved to Buenos Aires where he trained as production assistant. In 2010 he graduated with a MA in film production from the ECAL in Lausanne and the HEAD in Geneva. His first short film COTONOV VANISHED (2009) won the First Steps prize at Vision du Réel in Nyon in 2010. It also won the the prize of the best short film at the Festival dei Popoli in Florence in 2010. His last movie, PEDRO M, 1981, has been nominated for the Swiss Film Award 2016 in the short films cathegory. On January 2016, Andreas Fontana and Zahra Vargas have been received the Upcoming Lab Prize (Soleure) with a new documentary project, NOTHINGWOOD. He has worked as a production assistant for Jean-Stéphane Bron, Ingrid Wildi, David Maye and Mathias Staub. He also worked as a script writer for Zahra Vargas (La Fin d’Homère, selected in Berlin and Clermont Ferrand 2016) and Maryam Goormaghtigh(Vol au Panthéon, 2011). He is living and working in Geneva.

“This superb debut feature from Andreas Fontana puts an ingenious spin on the paranoid thriller: its main character is determined to behave as if he isn’t in one.” – Robbie Collin, Daily Telegraph (UK)

“The striking feature film debut from Andreas Fontana brings a prickly thriller sensibility to the closed world of high finance and a piquancy to the phrase ‘dirty money’.” – Wendy Ide, Screen International

“It is a film that continues to echo mysteriously inside my head.” – Peter Bradshaw, Guardian

“Written and directed by Andreas Fontana, making a formally precise, tonally perfect feature debut, “Azor” is a low-key shocker. It has you in its cool grip from the opening shot…” – Manohla Dargis New York Times