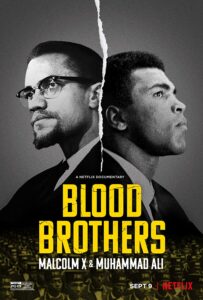 brotherhood that would not only change both men but change the world. Blood Brothers: Malcolm X & Muhammad Ali tells the extraordinary story behind the friendship —and the ultimate falling out— of two of the most iconic figures of the 20th century. Few people understand the bond these men shared. In this new feature-length documentary from producer Kenya Barris, director Marcus A. Clarke offers a fresh perspective by using insider voices and never-before-seen footage to chart this most complex of friendships, tracing the near simultaneous and symbiotic rise of the charismatic

and outspoken Olympic champion who charmed the nation, and the ex-con-turned intellectual revolutionary who railed against oppression. Through interviews with those closest to them — Malcolm X’s daughter Ilyasah Shabazz, Ali’s

brother Rahman and daughters Maryum and Hana — and cultural luminaries such as Cornel West and Al Sharpton, the film illuminates their meeting, bonding, and eventual falling out over

discord within the leadership of the Nation of Islam. Director Marcus A. Clarke joins us for a conversation about the brief but transformative relationship that developed between these two giants of the late 20th century civil rights, and anti-war movements. Clarke also talks about the powerful forces that eventually broke their bond, to the lasting regret of Muhammad Ali.

To watch: go to netflix.com/BloodBrothers

About the filmmaker – is a Brooklyn-born director & producer who directed Apple’s feature-length documentary, The WIZRD, following Atlanta rap superstar Future. Most recently he directed three episodes of Netflix’s reboot of Unsolved Mysteries V1 produced by 21 Laps, and three of eight installments in the Netflix Original Hip Hop docuseries Rapture, produced by Mass Appeal a 2018 SXSW selection. Clarke has 20 years+ of experience working in commercial production, television and film. In his early years he worked as a film runner for Spike Lee’s Forty Acres and a Mule Filmworks, was a production manager at table-top commercial co. Santiago Inc., and got an early start as a commercial first assistant director.His producer credits include CNN Films & Mass Appeal’s feature-length documentary on hip-hop fashion Fresh Dressed (Sundance Selection, 2015) and Nas Live From the Kennedy Center: Classical Hip-Hop (2018), which was the first hip hop documentary selection released as part of PBS’s critically-acclaimed Great Performances series.#bloodbrothers

“[Blood Brothers offers a cerebral, engrossing and fascinating examination of why this partnership played a bigger part in history than viewers might think.” – Andrew Murray, The Upcoming

“Powerfully illustrates the personal risks each man took in the service of freedom and equality for all Black people.” – Ronda Racha Penrice, TheWrap