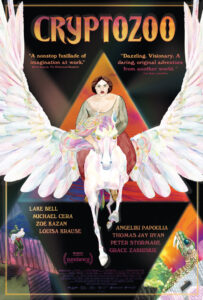 fantastical animated feature follows cryptozookeepers through a richly-drawn hallucinatory world as they struggle to capture a baku (a legendary =dream-eating hybrid creature) and begin to wonder if they should display these rare beasts in the confines of a zoo, or if these mythical creatures should remain hidden and unknown. Featuring the voice talents of Lake Bell, Zoe Kazan, Michael Cera, Louisa Krause, Peter Stormare, Thomas Jay Ryan, Grace Zabriskie and Angeliki Papoulia, CRYPTOZOO is written and directed by

Shaw, with Jane Samborski directing the stunning animation. Filmmakers Dash Shaw (director, screenwriter) and Jane Samborski (Animation Director, Producer) join us for a lively conversation on how the origin story was inspired by D&D / Pathfinder, the underground artists of the 1960s who influenced the animation style and the years of toiling on their passion project.

For screenings and updates go to: cryptozoofilm.com

Watch in theatre at: cryptozoofilm.com/tickets

“I give a round of applause to everyone involved in making this animated oddity because it certainly stands out. It’s a film I will never, ever forget.” – Lorry Kikta, Film Threat

“This time out, Shaw (in collaboration with animation director Jane Samborski) is even more assured as both a storyteller and as a crafter of images, be they outrageous or gorgeous, haunting or hilarious.” – Alonso Duralde, TheWrap

“This psychedelic paean to biodiversity and acceptance in a xenophobic world is alternately marvelous and messy.” – David Rooney, Hollywood Reporter

“The strangely earnest action movie never plays for laughs, and creates a weirdly touching portrait of sustained persecution in a hostile world where the strong exploit the weak, the feverishly exotic is always a threat, and no one is ever safe. –Stephen Garrett, Book & Film Globe

“When something like Dash Shaw and Jane Samborski’s Cryptozoo comes along, it’s easy to recognize as one of the most gorgeous works of American animation in ages.” – Juan Barquin, The Film Stage