In her galvanizing debut feature documentary, Bigger Than Us, Director 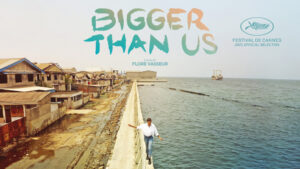 Flore Vassuer follows an international collection young people working to bring long term solutions to seemingly intractable social, political and economic issues. For six years, Melati Wijsen, 18, has been fighting the plastic pollution that is ravaging her country, Indonesia. Like her, a generation is rising up to fix the world. Everywhere, teenagers and young adults are fighting for human rights, the climate, freedom of expression, social justice, access to education or

food. Dignity. Alone against all odds, sometimes risking their lives and safety, they protect, denounce and care for others. The earth. And they change everything.  Melati goes to meet them across the globe. She wants to understand how to hold on and continue her action. From the favelas of Rio to the remote villages of Malawi, from

makeshift boats off the island of Lesbos to Native American ceremonies in the mountains of Colorado, Rene, Mary, Xiu, Memory, Mohamad and Winnie reveal a magnificent world, one of courage and joy, of commitment to something bigger than oneself. At a

time when everything seems to be or has been falling apart, these young people show us how to live. And what it means to be in the world today. Director Flore Vassuer as well as film subjects and activists Melati Wijsen and Mary Finn join us for an engaging conversation on how these inspiring young people are working to bring their passion, energy and desire to work across cultural, religious and political divides to find sustainable solutions.

For news and updates go to: biggerthanus.film

About the filmmaker – An entrepreneur in New York at the age of 24, Director Flore Vasseur lived through the Internet bubble, September 11 and a capitalist system that was cracking on all sides. Since then, she has written books, articles and television documentaries to understand the end of one world and the emergence of another. With her four frighteningly lucid novels, she attacks the grip of finance and the madness of a world based on technology. She questions our relationship to power, the elite in panic mode and asks the question: who governs? Alongside this approach of deciphering and sometimes denouncing, she undertakes a long-term work on the trail of rights defenders and whistleblowers. In Moscow, she directed Meeting Snowden about the former NSA contractor. Her latest book, What Remains of Our Dreams, is an investigative novel about the little-known real-life story of Aaron Swartz, the child prodigy of code who wanted us to be free, persecuted by the Obama administration. A logical continuation of her fifteen years of investigation and writing, Bigger Than Us is her first documentary film. Basically, her work is about free will, commitment and courage. The desire to live and to be worthy.