From director Dana Nachman (BATKID BEGINS, PICK OF THE LITTER) comes the 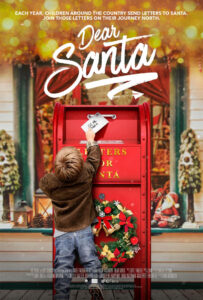 fanciful and poignant story of Operation Santa. For more than 100 years human elves have been helping Santa respond to the thousands of letters that are written and mailed to him. Through Operation Santa, the United States Postal Service makes it possible for the public to safely adopt these letters and make children’s dreams come true. DEAR SANTA invites audiences along for the magic of this massive endeavor. Traveling the country, much like Santa does on Christmas Eve, the film focuses on select Operation Santa

centers: some in metropolitan areas like the massive operation in New York City and others in small towns where the post office is the heart of the community. This is a no Christmas spoiler film and Santa himself has watched the film and can’t wait for the December 4th release! Director Dana Nachman drops down the chimney to talk about her latest, and much needed heart-warming ode to generosity, kindness, and unabashed humanity.

About the filmmaker – Director Dana Nachman is a veteran documentary filmmaker and former journalist. Her films have received dozens of awards from top film festivals across the U.S. and around the world. Her recent film PICK OF THE LITTER, which she directed with Don Hardy, premiered at the Slamdance Film Festival, was distributed by IFC Films, and was adapted into an original television series for Disney+ that she also co-directed. Her documentary BATKID BEGINS debuted at Slamdance Film Festival and was distributed by Warner Bros / New Line Cinema. Her film WITCH HUNT debuted at the Toronto International Film Festival and her film LOVE HATE LOVE debuted at the Tribeca Film Festival. She also directed the documentaries THE HUMAN EXPERIMENT, WASHED AWAY and the comedies HOOKED UP 2.0 and THE FINAL SHOW. Her television news work earned her multiple Emmy® awards, an Edward R. Murrow Award, and a regional AP award. Nachman is a member of the Directors Guild of America (DGA).

“Ultimately, “Dear Santa” is about pulling together, helping neighbors, loving each other and celebrating life and the spirit of giving. It’s a delightful gift at the end of a challenging year.” – G. Allen Johnson, San Francisco Chronicle

“Dear Santa delivers a desperately needed dose of holiday cheer during these troubled times that will leave even the most Grinch-like of viewers bathed in their own tears.” – Frank Scheck, Hollywood Reporter

“Overall, I think this documentary is perfect, even if it is a bit of a Christmas propaganda movie. This is the perfect time for that.” – Lorry Kikta, Film Threat

“Director Dana Nachman juggles the insights of children, the feeling of the season, and the aspirations of people seeking to do good works in several locations across the country in the three weeks of activity ahead of Christmas.” – Douglas Davidson, Elements of Madness