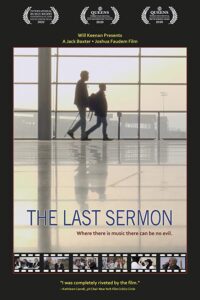 Aviv blues bar called Mike’s Place. THE LAST SERMON then takes us straight into today’s headlines when filmmakers Baxter and Faudem – united for life by the tragedy of that terrible night – seek answers about the suicide bombers who almost murdered them. In the aftermath of the infamous April 2003 suicide bombing at Mike’s Place that killed three and injured dozens, including Baxter, the filmmakers made the award-winning documentary BLUES BY THE BEACH (2004). But they didn’t get to tell the entire story at that time. THE LAST SERMON started in Jerusalem.

Baxter and Faudem and their film crew traveled to Greece, Macedonia, Serbia, Hungary, Germany, Czech Republic, France, then on to England. At Refugee Camps and  Mosques they interviewed, interacted and challenged Muslims and non-Muslims with the last words of Prophet Muhammad (PBUH): “There is no superiority of an Arab over a non-Arab, or a non-Arab over an Arab, or a White over a Black, or a Black over a White, except by righteousness and piety.” Director and subject Jack Baxter joins us for a conversation on the how the Mike’s Place bombing started him on a personal quest to confront hatred, ignorance and move those he meets to recognize our collective humanity.

For news and updates go to: thelastsermonmovie.com

About the filmmaker – Jack Baxter is a writer, director, producer and freelance journalist from New York City. He produced the controversial and critically acclaimed 1995 documentary “Brother Minister: The Assassination of Malcolm X.” Mr. Baxter and his wife, Executive Producer Fran Strauss-Baxter, are the producers of the award-winning documentary, “Blues by The Beach” (2004). Jack is the co-author of the graphic novel, “Mike’s Place: A True Story of Love, Blues, and Terror in Tel Aviv” (2015) published by Macmillan.

About the filmmaker – Joshua Faudem is an award-winning American-Israeli documentary filmmaker who has shot and directed television programs in Israel, Europe, Canada, and America. Mr. Faudem directed the award-winning documentary “Blues by the Beach” (2004) and is the co-author of the graphic novel “Mike’s Place: A True Story of Love, Blues, and Terror in Tel Aviv.”