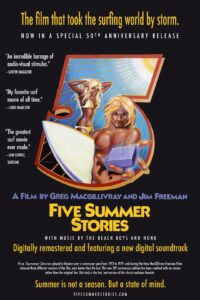 standard surf films when, in 1972, they released FIVE SUMMER STORIES. They were

two young Southern California filmmakers who entered the surf-film world in the mid-‘60s. FIVE SUMMER STORIES originated as a “farewell to surfing” from the talented duo, who were being courted by Hollywood and ready leave the surf-film world for other creative work. They handpicked great sequences they hadn’t used yet, secured legendary cinematographer Bud Browne for new material, and wove all the elements together into a series of stories. They topped it off with original music from the band Honk and

classic songs of the Beach Boys and suddenly you have an enduring cinema classic. From the allure of its Rick Griffin poster art to its tightly framed ultra-slow-motion camera work, this was a state-of-the-art 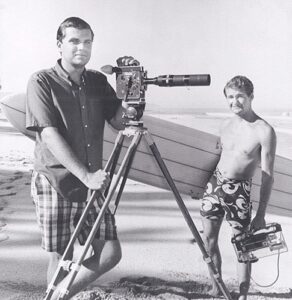 film that authentically, and often humorously, captured the state of a sport. Since its initial release FIVE SUMMER STORIES has toured America 10 times in four successive versions that played to more than a million people, many of them surfers and many more

that had never even touched a surfboard! Although very much in the surf film genre, FIVE SUMMER STORIES raised the art form to a new level and set the standard for the next two decades. Even today, it remains the standard by which all surf films are artistically measured. Co-director Greg MacGillivray joins us for a conversation on the long, strange trip that FIVE SUMMER STORIES has been for his soaring career, how it allowed him and MacGillivray / Freeman Film to become world’s leading producer and distributor of giant screen (IMAX) films.

For news and screenings go to: fivesummerstories.com

For more on their films go to: macgillivrayfreeman.com

For more go to: macgillivrayfreeman.com/five-summer-stories

About the filmmaker – Greg MacGillivray has been producing and directing award-winning films for more than 50 years. He started making films when he was just 13 and later partnered with Jim Freeman to form MacGillivray Freeman Films in 1966. He loves the continual chess game of making a film, where each move affects every element. Today, he has more than 60 films to his credit, including over 40 IMAX productions. Since the 1976 production of his first IMAX film, To Fly!, Greg has produced some of the most enduring films in the giant-screen genre. He has shot more 70mm film than anyone in cinema history and is the first documentary filmmaker to reach the $1 billion benchmark in worldwide ticket sales. Greg has received two Academy Award nominations for Best Documentary Short Subject: first in 1995 for The Living Sea, and then in 2000 for Dolphins. In 2002, the Giant Screen Theater Association honored Greg as one of the five most important contributors to the success of the industry. That same year, Greg accepted the Bradford Washburn Award, the highest honor bestowed by the Museum of Science in Boston, for his contribution to science education. For more go to: macgillivrayfreeman.com/team

“My favorite surf movie of all time.” – Laird Hamilton

“The greatest surf movie ever made” – Sam George, Surfline