Never before has journalism in America been so hotly debated. At a time when it 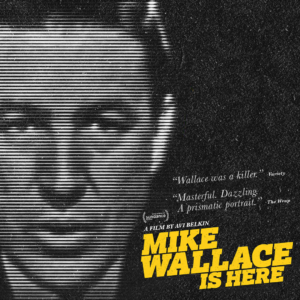 seems like the hard-hitting question is fighting for its right to be asked, MIKE WALLACE IS HERE turns the tough question loose on its inventor to understand how we got here and what’s really at stake. Legendary newsman Mike Wallace unflinchingly interrogated the 20th century’s biggest figures in over fifty years on the air, and his aggressive reporting style and showmanship redefined what America came to expect from broadcasters. Unearthing decades of never-before-seen

footage from the 60 Minutes vault, this documentary portrait explores what drove and plagued this restless reporter, whose storied career was entwined with the evolution of journalism itself. MIKE WALLACE IS HERE is told exclusively through archival footage, without one talking-head commentary or backward-looking interview diluting the immediacy and power of Wallace’s work. The film traces his career on the air from his invention of the “tough question” in his 1950s interview show Night Beat to his news specials of the ’60s and his extraordinary four decades on CBS’ 60 Minutes, examining how his genre-defining work changed the standards of broadcast journalism for good and for ill, while unpacking the personal qualities that made Mike tick. Director Avi Belkin takes us behind the mask of the fearless inquisitor to reveal a driven man fraught with doubt and insecurities.

For news and updates go to: mikewallaceishere.com

“A compulsively engrossing account of a career notable for its gutsy, confrontational attitude toward the power brokers in business and politics.” – Todd McCarthy, Hollywood Reporter

“A no holds barred, sobering look at one our most acerbic, in your face, troubled award winning journalist – Mike Wallace. CBS unlocked their vaults with exclusive archival footage, interviews and words from Wallace himself.” – Carla Renata, The Curvy Film Critic

“As Belkin’s brisk and compelling documentary fades to black, the director seems to hope that the Wallace quotation audiences cling to isn’t one of his fanged questions, but his optimism for the profession to which he dedicated his life” – Amy Nicholson, Variety