THE MOUNTAIN is a dark, hypnotic and surreal satire about repression and 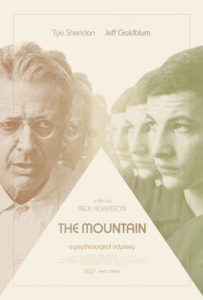 conformity set against the 1950’s “golden age” of American male domination.  (Tye Sheridan, READY PLAYER ONE, MUD), whose mother was sent to an asylum years ago, is an introverted young photographer at loose ends, ignored by his father (cult actor Udo Kier). After the death of his father, Andy is befriended by renowned lobotomist Dr. Wallace Fiennes (Jeff Goldblum, THE GRAND BUDAPEST HOTEL, JURASSIC PARK) and joins him on a tour to promote the doctor’s recently-debunked procedure. As Andy increasingly

identifies with the asylum’s patients, he falls in love with a rebellious young woman, Susan (Hannah Gross), and encounters the burgeoning New Age movement of the West. Also starring Denis Lavant (HOLY MOTORS). Director and co-writer Rick Alverson (THE COMEDY, ENTERTAINMENT) joins us for a conversation on the subversive performances of Goldblum and Sheridan and the ways his harrowing, brilliant film cuts to the core of savage male brutality in the guise of “science.”

For news and updates go to: kinolorber.com/The Mountain