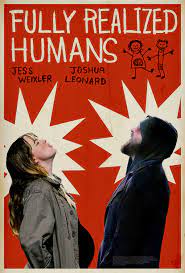 FULLY REALIZED HUMANS they set out to blow-up the accepted truth that there’s never a perfect time to have a baby. Jackie (Jess Weixler) and Elliott (Joshua Leonard) beg to differ. There will be a perfect time — just as soon as they’ve fixed all of their own issues and become the kind of people who won’t screw up their own kids the way their parents screwed them up. Realizing that if they want to break their  cycles of dysfunction once and for all, they’ll have to confront their deepest fears and greatest shortcomings head-on. With less than a month until their due date, they embark on a madcap mission to become  FULLY REALIZED HUMANS. This crusade will

push them to the edge of sanity, forcing them to battle with themselves, each other, their friends, and even their families. When the smoke clears, they’ll either be the world’s greatest parents… or they’ll be institutionalized. Director, co-writer and lead actor Joshua Leonard and co-writer and lead actor Jess Weixler join us to talk about the lightning quick turnaround for filming, working while pregnant and bringing together a talented supporting cast that includes Beth Grant, Tom Bower, Janizca Bravo, and Jennifer Lafleur.

For news and updates go to: fullyrealizedhumans.com

Director’s statement – My dear friend and creative partner-in-crime, Jess Weixler, was pregnant with her first child last year. I’d recently become a father myself, and we were both asking ourselves big questions like: “What does it mean to be a parent?” “How will this new responsibility affect us as artists?” “Are we going to make ALL the same mistakes our parents did?” And most significantly… “Are we READY to become adults?” So we decided to take all this existential exploration and head back to our indie roots to make a movie about it. We assembled a team of rock-star friends and collaborators and shot the film in 7 1/2 days on a shoestring budget. The resulting movie is one that we are very proud of — a scrappy, punk rock, midlife-crisis comedy that serves as both an immediate and true (if somewhat hyperbolized) snapshot of a potent turning point in our lives. – Joshua Leonard.

About the filmmaker – Jess Weixler (“Jackie”) – Writer/Associate Producer starred in THE LIE with Joshua Leonard (Sundance 2011). Some of her other work includes TEETH (Sundance 2007 where she was awarded the Special Jury Prize for Acting), THE DISAPPEARANCE OF ELEANOR RIGBY:THEM & HER/HIM, starring alongside James McAvoy, Jessica Chastain and Viola Davis (Cannes International Film festival 2014). THE FACE OF LOVE opposite Annette Bening, Ed Harris, and Robin Williams (TIFF 2013). WHO WE ARE NOW opposite Julianne Nicholson (TIFF in 2017), FREE SAMPLES with Jesse Eisenberg (Tribeca 2012), SOMEBODY UP THERE LIKES ME with Nick Offerman and Keith Paulson (SXSW 2012 audience award, Locarno Special Jury Prize),ALEXANDER THE LAST with Amy Seimetz (IFC 2009), LAMB (SXSW 2015), SISTER CITIES opposite Jackie Weaver(2016). ENTANGLEMENT opposite Thomas Middleditch (2017), CHAINED FOR LIFE opposite Adam Pearson, THE DEATH OF DICK LONG directed by Daniel Scheinert (Sundance 2018), IT Chapter Two (Warner Bros 2019), and soon to be released EVE directed by Tate Taylor. She took on the role of writer/director in APARTMENT TROUBLES (Los Angeles Film Festival 2014), a feature she co-wrote, co-directed, and co-starred in with Jennifer Prediger also starring Will Forte, Jeffrey Tambor, and Megan Mullally. On television she was a series regular on the AMC drama series THE SON opposite Pierce Brosnan and in the CBS hit drama THE GOOD WIFE over three seasons.

About the filmmaker – Joshua Leonard (“Elliot”) Writer / Director / Editor first came onto the scene in 1999 with the lo-fi sensation THE BLAIR WITCH PROJECT. His directorial debut, THE YOUTH IN US premiered at Sundance in ’05. Award-winning art doc, BEAUTIFUL LOSERS followed in ‘09. He then made his narrative feature debut as director, writer and star with THE LIE (Sundance ’11). Recently, he completed his sophomore feature as director and co-writer with BEHOLD MY HEART, which stars Marisa Tomei, Mireille Enos and Timothy Olyphant. In 2017, Leonard also developed a one-hour TV series with acclaimed director, Cary Fukunaga for EPIX. As an actor, Leonard continues to work on projects that push the envelope, most recently starring in Steven Soderbergh’s latest film, UNSANE. He received rave reviews for his performance in Lynn Shelton’s Independent Spirit Award-winning HUMPDAY and co-starred opposite Chloe Grace Moretz in Warner Bros’ IF I STAY. Leonard can also frequently be seen on television in shows like HBO’s True Detective and Togetherness and A&E’s Bates Motel. Leonard has directed music videos for popular acts such as Fitz and the Tantrums, Black Rebel Motorcycle Club, Harper Simon and Morcheeba, as well as teaching directing, writing and acting at The New York Film Academy, UC Irvine & Santa Barbara and Academia Internacional De Cinema in Sao Paolo, Brazil. He began his career working with documentarians and experimental filmmakers at Mystic Fire Video, where he worked on films with subjects ranging from famed beat poet Alan Ginsburg, the Dalai Lama and comparative mythologist Joseph Campbell.

“Charming… This duo shouldn’t wait another decade to cook up another idea.” – Kate Erbland, IndieWire

“Due to their easy energy and Leonard’s subtle, lo-fi direction and tone (shadows of the modern master of comedic discomfort, Onur Tukel), Fully Realized Humans is a lot more complete than it first seems.” – Richard Whittaker, Austin Chronicle

“A sometimes hilarious post-mumblecore meditation, rumination and romp about getting prepared (for childbirth) and realizing how unprepared you are…and panicking.” – Roger Moore, Movie Nation

“No parent is perfect. But some movies can achieve that greatness, and this 74-minute roller coaster of emotions is about as flawless as microbudget dramedies get.” – Asher Luberto, The Playlist

“Will likely strike a chord with many audience members, bolstering Leonard’s and Weixler’s reps as tellers of unusual tales for kinda-sorta grown-ups.” – John DeFore, The Hollywood Reporter