Gina (Sally Phillips) is turning fifty and not feeling fabulous. When she is dismissed 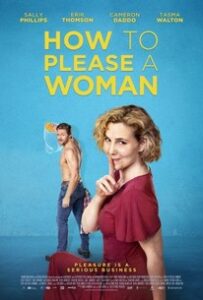 from her role in a liquidation company, she knows future job prospects for someone her age

are slim. Gina despairs of what her future might hold. In this beguiling, sweet hearted comedy, HOW TO PLEASE A WOMAN, Gina is taken by surprise when for her fiftieth birthday a male sex worker, a gift sent by her girlfriends, offers to do anything she wants. She asks him to do for her what no one else will – she has him clean her

house. Amused and delighted, her friends wish for a sexy cleaner themselves, sparking a new career for Gina who decides to employ the entire male removals team as house cleaners…with benefits. Written and directed by Renée Webster, and starring Sally Phillips (Bridget Jones’s Diary, VEEP). HOW TO PLEASE A WOMAN is a precarious, often hilarious and revealing journey into the vulnerable world of what women really want and how hard it can be to get it right.

For updates and screenings go to: how-to-please-a-woman

Director’s Statement – I wanted to make a film that would come roaring out of left field and aim at your heart. I also wanted to really find meaningful ways to explore one of our themes of female sexual empowerment. There is a lot of sexual content in the film, but I don’t sexualize the visual representation of women. Instead, we honor what women look like, and I give sexual stories to women in that huge, under explored area of those ‘no longer young, and not yet old.’ – Renée Webster

“This is a rare film that makes you feel lighter, fresher, and fully revitalised after watching it. It’s the kind of film that you want to spend hours talking with your friends about, reminiscing about how you could relate to what you’ve just seen.” – Andrew F. Peirce, The Curb

“It’s a relatable film that touches on many of the frustrations that plague a generation of women who have been made to feel invisible.” –  Wenlei Ma, News.com.au

“Most definitely not for the prudish or faint-hearted, How to Please a Woman is a raucous, if slightly ragged tale.” – James Croot, Stuff.co.nz

“Its candour is engaging and so, too, is the camaraderie between Gina and her pals, male and female.” – Sandra Hall, Sydney Morning Herald

“This is a surprisingly sensitive (considering the set-up could have come from a 70s sex comedy) look at what it is that women want, and it turns out it’s a man who’s good at cleaning and good in bed” – Anthony Morris, It’s Better in the Dark