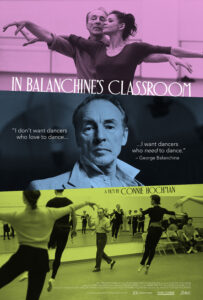 ballet for the 20th century, is celebrated in this homage to his nonpareil choreography, the basis of his body of work for the New York City Ballet and the technique taught at the world-renowned School of American Ballet. Some of Balanchine’s greatest stars describe the inventiveness, precision, speed, and musicality he demanded: Jacques d’Amboise (“It’s like I was a pupil of Einstein”), Merrill Ashley (“a privilege of a lifetime”), Gloria Govrin, Suki Schorer, Edward Villella, and

Heather Watts (“He was some kind of mad scientist”). Balanchine instilled in  each of them an abiding, obsessive love of dance and an almost religious desire to pass along his artistry and vision. The depth of

Balanchine’s passion – and theirs – is dazzling, as is much of the never-before-seen footage of him in the classroom. Director Connie Hochman joins us for a conversation on the impact George Balanchine had on the trajectory of ballet in America, the dancers who’s lives he changed and his living legacy in the people who continue to teach new dancers in a manner that reflects their interpretation of the Master’s credo.

For news and updates go to: zeitgeistfilms.com/film/inbalanchinesclassroom

About the filmmaker – Connie Hochman was a professional ballet dancer with Pennsylvania Ballet where she performed many of George Balanchine’s masterworks. As a child in the 1960s, Connie trained at the School of American Ballet and danced alongside the New York City Ballet, with Balanchine at the helm. During these years, she witnessed a profound bond between the master and his dancer-disciples, which continued to inspire and fascinate her. Decades later, Connie’s childhood memories of Balanchine, combined with a desire to understand more, led her on a mission to solve a mystery. What exactly happened in Balanchine’s classroom, where he developed the dancers and the dancing to serve his choreographic vision? In 2007, Connie began a series of interviews with former Balanchine dancers – ninety in all – to explore the phenomenon of Balanchine’s classroom. Why did he teach and not just choreograph? What did he teach? How did he teach? How did his daily class relate to his ballets? Their remembrances of his unorthodox methods and transformative teaching form the basis of IN BALANCHINE’S CLASSROOM. In addition to the dancer interviews, Connie launched an extensive search for visuals that would bring the story to life. She discovered a trove of never-before-seen archival footage of Balanchine in America. With approval from The George Balanchine Trust, Connie traveled around the country and to Europe to film Balanchine’s former dancers staging his ballets, teaching classes, and passing on their knowledge to today’s generation. This wealth of material formed the foundation for In Balanchine’s Classroom.

“In mathematics, there was Newton; in psychology, there was Freud; and in American ballet, George Balanchine was a foundational genius.” – Teo Bugbee, New York Times

“We are treated to an impressive amount of never seen before footage from Balanchine’s class archives, as well as rehearsal and performance video featuring the disciples or the man himself.” – Hanna B, Film Threat