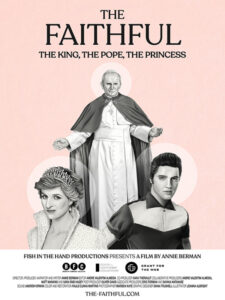 today, thanks to their devoted followers who love, admire, and consume them. Literally. THE FAITHFUL a new film by writer/director Annie Berman, powerfully explores fandom, memorabilia and the magnetic appeal of three of the most influential cultural icons of our time. THE FAITHFUL, twenty years in the making, leads viewers on an emotional journey leaving them looking inwards, reflecting on their own lives and the connections they cherish. A Pope John Paul II lollipop. An Elvis Presley shower curtain. A Princess Diana teacup. These are just some of the countless pieces of memorabilia that these pop culture icons’ most

devoted fans collect and cherish… but why? Berman profiles these figures’ biggest fans and makes numerous pilgrimages to Vatican City, Graceland, and Kensington

Palace. As the years go by, the film itself becomes increasingly entwined with Berman’s daily life and identity, much like how these officially-licensed knick-knacks define the fans she filmed. Director Annie Berman  joins us for a conversation on what attracted her to these culturally significant figures, why are people so invested in the lives of these particular icons and how this 20-year journey has impacted he life.

For news, screenings and updates go to: the-faithful.com

Q&A with director Annie Berman following the 7:00 PM screening on 10/10 at Laemmle Monica Film Center during the week-long in-theater release.

Q&A with director Annie Berman following the 7:30 PM screening on 10/11 at Laemmle Playhouse 7 in Pasadena.

Virtual cinema release starts 10/15 at Laemmle.com – accessible from anywhere in the U.S.

About the filmmaker – Annie Berman, Producer, Director, Writer, Cinematographer, Narrator, Co-Editor is a media artist living and working in New York City. Named one of Independent Magazine’s “10 Filmmakers to Watch,” her films, videos, performances, and installations have shown internationally in galleries, festivals, universities, and conferences, including the MoMA Documentary Fortnight, Rooftop Films, Galerie Patrick Ebensperger Berlin, Kassel Hauptbahnhof,  Spring / Break Art Show, Flux Factory, Babycastles Gallery, and the Rome Independent Film Festival where she was awarded the Best Experimental Film Prize. Her work has received support from the Puffin Foundation, the New York State Council on the Arts, Wave Farm, Grant for the Web, the Leonard Bernstein Festival of the Arts, the Center for Independent Documentary, Signal Culture, The Rockefeller Brothers Fund, and UnionDocs. She holds an MFA in Integrated Media Art from Hunter College, teaches at City College, and is a member of the Brooklyn Filmmakers Collective.

“My favorite film we’ve screened in my five years as associate programmer at USC School of Cinematic Arts!” – Matthew Meier