Long ago, four extraordinary beings of dual male and female 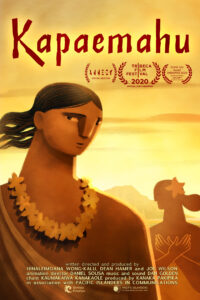 spirit brought the healing arts from Tahiti to Hawaii and imbued their powers in four giant boulders. The stones still stand on Waikiki Beach, but the true story behind them has been hidden – until now. Shortlisted for the 2021 Oscar® in the Best Animated Film – Short Form, KAPAEMAHU brings this powerful legend back to life in vivid animation, seen through the eyes of a curious child.  Co-directors, and co-producers Joe Wilson, (Out in the Silence) Dean Hamer (The Science of Desire, The God Gene) and Hinaleimoana Wong-Kalu (Leitis in

Waiting, Lady Eva) joins us for a conversation on the ways in which indigenous cultures of the Pacific Islands have embraced third-gender (mahu) identities and celebrate the ability and spirit of male and female strengths, as well as the decision to tell the story of Kapaemahu in an animated story format.

For news and updates go to: kapaemahu.com

Director’s Statement – I am Kanaka — a native person descended from the original inhabitants of the islands of Hawaii.  Our survival as indigenous people depends on our ability to know and practice our cultural traditions, to speak and understand our language, and to feel an authentic connection to our own history. That is why I wanted to make a film about Kapaemahu, and to write and narrate it in Olelo Niihau – the only form of Hawaiian that has been continuously spoken since prior to the arrival of foreigners. It is not enough to study our language in an American classroom, nor to read about our history in an English language textbook. We need to be active participants in telling our own stories in our own way. I am also mahu, which like many indigenous third-gender identities was once respected but is now more often a target for hatred and discrimination. I want our young people to understand that the ability to embrace both the male and female aspects of their spirit is not a weakness but a strength, a reason to rejoice not to fear.  Whether it is protecting Mauna Kea or Kapaemahu, I shall always believe in what historian S. M. Kamakau articulated in 1865 : He makemake ko’u e pololei ka moolelo o ko’u one hanau, aole na ka malihimi e ao ia’u I ka moolelo o ko’u lahui, na’u e ao aku I ka moolelo I ka malihini.  (“I want the history of my homeland to be correct. The foreigner shall not teach me the history of my people, I will teach the foreigner.”) ~ Hinaleimoana Wong-Kalu

About the filmmaker – Director, Producer Dean Hamer is a New York Times Book of the Year author, Emmy and GLAAD Media award-winning filmmaker, and National Institutes of Health scientist emeritus with a long history in communicating complex and controversial ideas to diverse publics.  He formed Kanaka Pakipika with partner Joe Wilson and documentary film protagonist Hinaleimoana Wong-Kalu to collaborate on an insightful series of films that have opened the eyes of the worlds to the lessons to be learned from Polynesia’s unique approach to diversity and inclusion.  He is currently working on a book and museum exhibition based on Kapaemahu.  Hamer is  the author of several best-selling nonfiction books including “The Science of Desire” and “The God Gene,” has been a consultant for the BBC and Discovery channels, and his research has been featured in Time, Newsweek, and Science magazines and on Frontline and Oprah.

About the filmmaker – Director, ProducerJoe Wilson is an Emmy Award-winning filmmaker dedicated to telling stories that emanate from the voices of those on the outside.   His feature and short films combine live action with animation to explore pressing social issues through innovative storytelling.  Wilson’s work has screened and won awards at festivals around the world including Berlin, Toronto and Tribeca, been viewed by millions of viewers on PBS, ARTE and other international broadcasts, and has been supported by Sundance, Ford and the Corporation for Public Broadcasting. Wilson’s 2010 film Out in the Silence focused on the challenges of LGBT people in rural and small town America and became the centerpiece of a multi-year national campaign to open dialogue and build bridges across socio-political divides. Shortly after, he and partner Dean Hamer began their now decade-long collaboration with Hinaleimoana Wong-Kalu, first documenting her story in the PBS Independent Lens Audience Award-winner Kumu Hina, then with Hina joining as producer on a series of films about gender diversity in the Pacific, including Leitis in Waiting, Lady Eva, and The Rogers.  Kapaemahu is Wilson’s fifth film in collaboration with Hina. Prior to filmmaking, he served as Director of Human Rights at the Public Welfare Foundation and Producer of Pacifica Radio’s Democracy Now.

About the filmmaker – Director, Producer, Narrator Hinaleimoana Wong-Kaluis a Native Hawaiian teacher, cultural practitioner and filmmaker who uses digital media to protect and perpetuate indigenous languages and traditions. She began her film work as a protagonist and educational advisor for the award winning films Kumu Hina and A Place in the Middle, and received a National Education Association Human Rights Award, Native Hawaiian Educator of the year and White House Champion of Change Award for the groundbreaking impact campaigns associated with those films. Continuing her journey to the other side of the lens, Kumu Hina produced the PBS/ARTE feature documentary Leitis in Waiting and award-winning short Lady Eva about her transgender sisters in the Kingdom of Tonga. Hina is also a transgender health advocate, burial council chair, candidate for the Board of Trustees of the Office of Hawaiian Affairs, and composer of “Ku Haaheo E Kuu Hawaii,” the internationally-known anthem for the protection of Mauna Kea which was honored as Hawaiian Song of the Year in the 2020 Na Hoku Hanohano Awards, known as the Hawaiian Grammys.