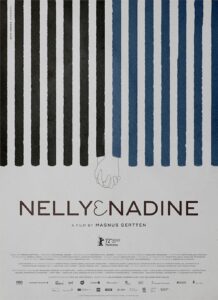 love story between two women falling in love on Christmas Eve 1944, in the Ravensbrück concentration camp. A Belgian prisoner and opera singer Nelly Mousset-Vos had been asked to sing Christmas carols in one of the French populated Ravensbrück barracks. After a couple of songs, a Chinese born woman and fellow prisoner, Nadine Hwang, calls out from the dark: ”Sing something from Madame Butterfly!”. Despite the two being separated in the last months of the

war, Nelly and Nadine manage to later reunite and spend the rest of their lives together. For many years their love story was kept a secret, even to some of their closest family. Now Nelly’s granddaughter, Sylvie, has decided to open

Nelly and Nadine’s unseen personal archives and uncover their remarkable story. Director Magnus Gertten (Every Face Has a Name, Harbour of Hope) stops by to talk about his enthralling exploration of Nelly & Nadine and their remarkable stories, their wartime suffering, the shared mysteries, love against all odds, the healing power of music, well kept secrets, and the complicated family stories of concentration camp survivors, and dealing with the ghosts of the past.

For more go to: autoimages.se/nelly_nadine

About the filmmaker – Magnus Gertten is an award-winning director and producer from Malmö, Sweden. Since 1998, he has directed more than 15 documentaries for SVT and international TV channels. His films have been screened by broadcasters and at film festivals in more than 60 countries. Magnus Gertten’s latest works includes Nelly & Nadine, and Only the Devil Lives without Hope which premiered at cph:dox, HotDocs and EIDF Korea and travelled world-wide to festivals and on television. Becoming Zlatan, co-directed with his younger brother Fredrik Gertten premiered at the 2015 IDFA festival and has travelled international festivals and was sold for distribution worldwide including a global deal with Netflix. Every Face Has a Name has received several international awards, including a FIPRESCI Award. The film was screened at The European Parliament. His film Tusen Bitar / A Thousand Pieces, co-directed with Stefan Berg, has sold over 160.000 tickets in Nordic cinemas. His documentary Harbour of Hope had Swedish cinema release and its international festival premiere at Thessaloniki Documentary Film festival in March 2012. Rolling Like a Stone (2005) won the Best Music Documentary Award at the Silverdocs/AFI Festival in 2006. Long Distance Love (2008) won Best Documentary at Hamptons International Film Festival in 2009. Magnus Gertten has a background as TV and radio journalist, including several years as a music journalist. Since 2017 he’s an honorary Doctor at the Malmö university. Magnus Gertten is co-owner of Auto Images and the creative center of the company.

“The film is moving for the intimacy it depicts, an archive as unlikely as the love story itself.” – Teo Bugbee, New York Times

“A simple story told in a simple style and, quite simply, one of the best movies of the year. Carve out some more space in your chest – this is seriously heart-swelling stuff.” – Paddy Mulholland, Spectrum Culture

“The love story is remarkable in its own right but the film also shows the way these sorts of histories could be hidden in plain sight.” – Amber Wilkinson, Eye for Film

“Nelly & Nadine” isn’t just a war movie but also a touching family history, an unforgettable romance and, above all, a magnificent tribute to the power of persistence in art, life and love.” – Elizabeth Weitzman, TheWrap