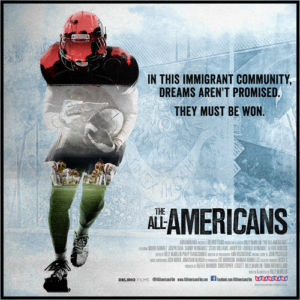 immigrant population, East Los Angeles, a community that sits squarely in the crossfire of debate about American identity. Yet every November, this community comes together for a distinctly American event, drawing 25,000 proud locals to one of the country’s fiercest high school football rivalry games: The East L.A. Classic. THE ALL-AMERICANS follows four students seeking glory on the field, while grappling with personal obstacles and striving to make sense of their community’s place in today’s America. Director / Producer / Editor / Writer Billy McMillin (Iraq in Fragments, West of Memphis, Mike Wallace is Here) joins us to talk about his feature documentary debut, THE ALL-AMERICANS, and it’s intimate, unvarnished look at young men, often living on the margins, in their dogged pursuit of the American dream.

About the filmmaker: Billy McMillin – Director, Producer, Writer, Editor has spent over a decade as a writer and editor crafting a diverse mix of stories—from war-torn life in Academy Award Nominee Iraq in Fragments, to an epic search for justice in West of Memphis, to a quest for greatness amongst the world’s best 7-year-old golfers in The

Short Game. He edited Hulu’s original documentaries Becoming Bond and Too Funny To Fail, and led a team of editors on History & Viceland’s docuseries Hunting ISIS and SundanceTV’s true crime series No One Saw a Thing. Most recently, he edited the all-archival feature documentary Mike Wallace Is Here, which premiered in competition at the 2019 Sundance Film Festival and was released theatrically by Magnolia Pictures this summer. The All-Americans is his feature directorial debut.

For news, screenings and updates go to: allamericansfilm.com