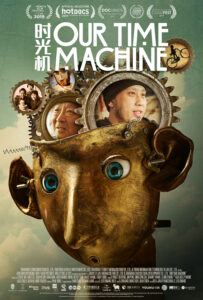 on 43-year-old Maleonn, one of China’s most influential conceptual artists, and his father, Ma Ke, former artistic director of the Shanghai Chinese Opera Theater. After being humiliated and forbidden from working for a decade during the Cultural Revolution, Ma Ke immersed himself in theater. The mysterious excitement of Ma Ke’s creative world inspired the young Maleonn, but his father’s absences stoked early feelings of resentment. When Ma Ke is diagnosed with Alzheimer’s, Maleonn pours everything into an ambitious new theater project: “Papa’s Time Machine,” a visually stunning time-travel adventure told with human-sized puppets. At the play’s heart are

autobiographical scenes inspired by Maleonn’s memories with his father. He hopes this will bring them together artistically and personally. Facing his father’s painful decline, Maleonn becomes more aware of life’s complexities. There are

no effortless masterpieces or simple solutions. And there’s no traveling back in time to retrieve what has been lost. OUR TIME MACHINE probes the complex relationships of a family in transition, generation to generation, filtered through the lens through art, theatre and puppeteering. Co-director S. Leo Chiang joins us to talk about his collaboration with co-director Yang Sun and subject Maleonn as well as unpack the multi-layered questions concerning memory, dreams, love, and family.

For news, screenings and updates go to: timemachinefilm.com

Directors’ Statement Those who grew up in post-Cultural Revolution China lived through a kind of socio-economic transformation that would have taken another country 100 years to bring about. In the span of 20 years, cities emerged from towns, the economy generated unprecedented wealth for some while leaving others behind, and new roads and digital networks connected China to the world. These migrations within our country and its rapid digitization have fundamentally changed the way people communicate and relate to one another. So, when we came across Maleonn and his ageing father, both artists, but who came of age on opposite sides of the Cultural Revolution in China, we made immediate personal connections. We see a story that could be our own in the not-so-distant future. For us and for Maleonn, the struggle to express affection towards one’s family goes hand in hand with defining and sharing the meaning behind devoting one’s life to art. Our intentions in crafting our film are to move others the way it has profoundly moved us. This is an evergreen story, relevant for past and future generations and across cultural divides, so long as there is love between children and their parents. Our story provides a needed addition to highlight the similarities between people in the West and in China during a time where the political language can be hostile and divisive.We hope this film celebrates the process in which two men reconcile their past feelings and create something together that repairs a distressed part of the fabric of Chinese society. – S. Leo Chiang and Yang Sun

“The issues of aging and familial relationships and the appealing nature of this family would make “Our Time Machine” worthy of a look in any case, but what puts it over the top is Maleonn’s fascinating visual creations.” – G. Allen Johnson, San Francisco Chronicle

“S. Leo Chiang and Yang Sun’s vibrant documentary about this labor of love proves to be a multi-layered metaphor of the interplay of art, memory, loss, and reconciliation, as well as a study of a touching and fraught father-son relationship.” – Peter Keough, Boston Globe

“Even though Our Time Machine is about a big, ambitious stage production with some visually stunning puppets, the documentary’s smaller, quieter moments with Maleonn and his family are where the movie is at its best.” – Carla Hay, Culture Mix

“Maleonn’s wondrous creations are enough of an attraction on their own, but the film… has many more layers to reveal about the legacy of Cultural Revolution, familial relationships, the agonies of love and loss and the circle of life.” – Scott Tobias, Variety