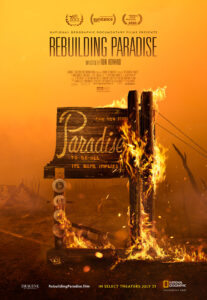 2018. A tragedy that began with a spark from a transmission line in Northern California, coupled with climate-impacted conditions, quickly grew into a devastating firestorm that engulfed the picturesque city of Paradise, California. By the time the Camp Fire was extinguished, it had killed 85 people, displaced 50,000 residents and destroyed 95% of local structures. It was the deadliest U.S. fire in 100 years — and the worst ever in California’s history. As residents faced the damage to their lives, to their homes and to more than 150,000 acres in and around their 141-year-old town, they did something amazing: They worked together to heal. The community members went on to forge a bond stronger

than what they had before the catastrophe, even as their hope and spirit were challenged by continued adversity: relocations, financial crises, government hurdles, water poisoning, grief and PTSD. From the moment the crisis began, The Camp Fire and its overwhelming aftermath became a de facto lesson in what we all must do: protect our environment, help our neighbors, plan for future dangers and remember to preserve the traditions that unite us — just as these resilient citizens did when they began the important task of REBUILDING PARADISE. Producer Sara Bernstein joins us for a conversation on how the production team, led by Oscar-winning director Ron Howard gained the confidence and trust of families scarred by one of the most devastating fires in California as well as documenting the resiliency and character of the people rebuilding Paradise.

For news and updates go to: nationalgeographic.com/rebuilding-paradise

About the filmmaker – Sara Bernstein is an award-winning producer and Executive Vice President at Imagine Documentaries the newly launched documentary division of Ron Howard and Brian Grazer’s, Imagine Entertainment. Recent feature films she has executive produced include Once Were Brothers: Robbie Robertson and the Band (2019) and Dads (2019) which premiered at the Toronto International Film Festival. The Ron Howard-directed documentary film, Rebuilding Paradise (2020), for National Geographic Films, D.Wade: Life Unexpected (2020) for ESPN Films and the documentary feature film on legendary chef Julia Child, Julia (2021) directed by Academy Award nominees Julie Cohen and Betsy West. Prior to joining Imagine, Bernstein was Senior Vice President, HBO Documentary Films over seeing nonfiction development and production for HBO. Credits include Academy Award-winner Citizenfour (2014), Academy Award-winner Music by Prudence (2010), Academy Award nominees Burma VJ: Reporting from a Closed Country (2008), Iraq In Fragments (2006), The Children of Leningradsky (2005), Poster Girl (2010). Emmy-nominated The Inventor: Out for Blood in Silicon Valley (2019), Emmy-nominated The Case Against Adnan Syed (2019), Judd Apatow’s Emmy-winning The Zen Diaries of Garry Shandling (2018), Emmy winners Going Clear: Scientology and the Prison of Belief (2015), White Light, Black Rain: The Destruction of Hiroshima and Nagasaki (2007) and Mea Maxima Culpa: Silence in the House of God (2012). Emmy-nominated The Case Against 8 (2014), Mapplethorpe: Look At The Pictures (2016), Chris Hegedus & D.A. Pennebaker’s Emmy-nominated Unlocking The Cage (2016); Beware the Slenderman (2016), I Love You Now Die (2019) and Mommy Dead and Dearest (2017). Bernstein has garnered 10 Emmy wins, 29 Emmy nominations and 11 Peabody Awards. Documentaries she has supervised have garnered 2 Oscars and 13 Oscar nominations.

“Rebuilding Paradise might easily have blazed with righteous fury, but its conclusions are quieter and bleaker.” – Ellen E Jones, Guardian

“Howard’s documentary is not so much about the fire as it takes a looks at the resilience members of the community showed. It is both painful and inspirational.” – Rick Bentley,Tribune News Service

“Mr. Howard wants us to know that greater challenges lie ahead… Yet his documentary also dramatizes the resilience and resourcefulness we can bring to bear in meeting them. Calamity, the film says, isn’t destiny.” – Joe Morgenstern, Wall Street Journal