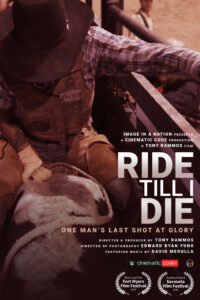 for a troubled past. His father walked out on his family and Ricky was on his own at 15 years old, but he had already found solace in bull riding. The eight-second duel of man versus beast was his emancipation and Ricky was successful early and often. Prize money earned in the arena was adding up and a chance to make the pro circuit was in sight. But despite all his success, Ricky could never win a championship and with the rigorous schedule came a heavy price. Ricky suffered many injuries, including a horrific incident where his face was crushed in 2010 which nearly ended his career. Twenty-five years

later, along with his son, Lil’ Ricky, and fellow rider Ernie Courson, Ricky continues to ride and despite warnings from his wife, mother, and his ailing body. In RIDE TILL I DIE Ricky realizes his time is running out. His body is constantly in pain as over two decades of bull riding has taken its toll. Despite all the broken bones and permanent scars, Ricky keeps riding. Ricky is determined to chase that elusive title or die trying. Director Tony Rammos joins us for a conversation on the insanely dangerous world of bull riding, cowboy culture and what makes Ricky Ringer ride.

For updates and screenings go to: ridetillidiefilm.com

About the filmmaker – Director/ProducerTony Rammos took the long road to directing his first feature film, spending over 17 years in the television industry working in newsrooms, studio shoots, live events and on-remote locations. Eventually, Tony found his true love of storytelling by directing and producing a series of short documentary-style programs for World Fishing Network. That experience helped him in achieving his dream of entering the world of filmmaking. Tony earned his Bachelor of Arts at the University of Toronto in Mississauga, Ontario, Canada, before completing a post graduate program in New Media and Journalism at Sheridan College in Oakville, Ontario, Canada. An internship at a national sports television station followed and his career was born. An avid sports fan who`ll watch any major sporting event, Tony also enjoys traveling, attending concerts and working out, as long as something good is playing on the headphones.