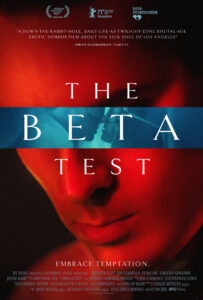 mysterious letter for an anonymous sexual encounter and becomes ensnared in a sinister world of lying, murder, and infidelity

in this scintillating satire. Written and directed by PJ McCabe and Jim Cummings,  THE BETA TEST is a dark satire thriller of Hollywood power dynamics and the vast interconnectivity of digital culture today. This winding thriller displays the problematic nature of the

entertainment industry and humanity’s  willingness to jeopardize our happiness in small and constant decisions. It asks the question “In the age of internet consumerism and digital tracking, does anyone truly have privacy? And can we ever truly rest without having all the answers?” Co-directors / co-writers Jim Cummings and PJ McCabe join us for a conversation on this fantastical, thrill-ride through the avaricious landscape that defines “Hollywood,” and the pursuit of power, money and sex.

For news, screenings and updates go to: ifcfilms.com/films/the-beta-test

About the filmmaker – JIM CUMMINGS (Director/Writer/”Jordan”) is a Sundance and South by Southwest Winning filmmaker from New Orleans. He is a champion of the digital independent filmmaking renaissance and is very vocal at film festival happy hours and on social media about DIY filmmaking. His films Thunder Road and The Wolf of Snow Hollow have been showcased and praised around the world for their genre-fluid aesthetics and his new film The Beta Test is no different. He lives in Los Angeles and treats his home like a film studio.

About the filmmaker – PJ MCCABE (Director/Writer/”PJ”) is a writer, director, and actor from Philadelphia. His films have been showcased at Sundance, South by Southwest, and Fantasia Film Festivals. His most recent feature and directorial debut (The Beta Test) premiered at Berlinale and the Tribeca Film Festival. He has also written and developed multiple projects for such networks as FX and Hulu. He lives in Los Angeles with his wife and his dog.

“A brutally unflattering satire which wields its humor of discomfort like a scalpel.”  – Wendy Ide, Screen International

“A delicious fermentation of Hitchcock, American Psycho, and Entourage, The Beta Test is a seductively dark and deviously amusing film that titillates and tantalizes.” – Kat Hughes, Film Disclosure

“As a thriller, the anxiety and uncertainty ramps up minute by minute, mostly due to how Jordan reacts to absolutely everything and everyone around him.” – Katie Hogan, FILMHOUNDS Magazine