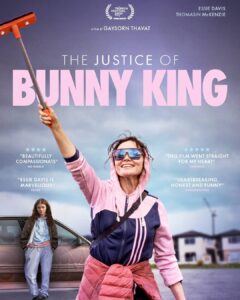 with a sketchy past, earns her keep by washing windows at traffic lights. Using her razor-sharp wit to charm money from gridlocked motorists, she saves every cent to get back the custody of her kids. After promising her daughter a birthday party, Bunny must fight the social services and break the rules to keep her word, but in doing so risks losing her children altogether. Accompanied by her niece Tonya (Thomasin McKenzie, LEAVE NO TRACE, JO JO RABBIT), a

fierce teenager running away from home, Bunny is in a race against the clock and headed towards an epic showdown with the authorities. With her first feature, director Gaysorn Thavat has made a deeply affecting film about a woman refusing to back down from a system that’s stacked against her. At each

step of Bunny’s journey, the film grounds itself in her pain and passion, and thanks to Essie Davis’ fearless work, Bunny becomes an indomitable hero. A testament to resilience in the face of adversity, The Justice of Bunny King is served in exquisite fashion. Director and co-story writer Gaysorn Thavat joins us for a conversation on the many challenges of making their first feature film, despite the many years spent in the industry, and the joy of collaborating with two of the finest actors working today, Essie Davis and Thomasin McKenzie.

For updates and screenings go to: filmrise.com/the-justice-of-bunny-king

About the filmmaker – Gaysorn Thavat began her film career in 1995 working in the camera department. Starting as a clapper loader she worked her way up to 1st AC before making the switch to directing with television commercials in 2004. Gaysorn directed many successful campaigns as a TVC director, but is most proud of her PSA work for The Auckland CityMission, MSD-Family Violence and the Breast Cancer research Trust. Along with commercials, Gaysorn has also directed episodic television. Recently for Warner’s–FRESH EGGS, and also Screentime/Lippy Pictures – THE GULF. In 2009 Gaysorn directed her first short film, BRAVE DONKEY, written by Gregory King. Brave Donkey was selected for numerous festivals including Melbourne, SXSW, London BFIand Locarno. Gaysorn is one of the founding members of SWAG (Screen Women’s Action Group) and is a beekeeper and keen fisherwoman when she is not making films.

“The bleak style reflects the dire situation and bleakness of Bunny’s story. Its restraint mirrors Henderson’s writing, which manages to feel real and poignant within the swirling drama.” – Katie Walsh, TheWrap

“Davis is a force of nature, delivering authenticity flavored with spirit and spite.” – Hope Madden, MaddWolf

“The Justice of Bunny King is an angry, funny and deeply loveable film. While there are deadly serious issues at its heart, the film remains deft, warm and witty.” – Graeme Tuckett, Stuff.co.nz

“This film burrowed under my skin and went straight to my heart. Potent and heroic, Bunny opens a door into the so often little-seen lives of women and families living with trauma, desperation and powerlessness and she’s amazing.” – Kate Rodger, Newshub (NZ)