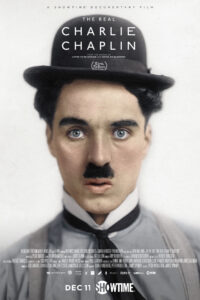 the world. But who was THE REAL CHARLIE CHAPLIN? From the award-winning creative team behind NOTES ON BLINDNESS and LISTEN TO ME, MARLON comes an innovative portrait of a complex figure whose life was as extraordinary as his art. It traces Chaplin’s journey from the slums of late-Victorian London to the bright lights of Hollywood at the dawn of cinema. Movies that transcended language brought him unparalleled fame and fortune, a studio empire to enact his obsessive creative vision, before political controversies and  personal scandals threatened his ascendancy. With unprecedented access to the Chaplin archives, the film combines dramatic reconstructions with previously

unheard recordings, intimate home movies and behind-the-scenes material, interwoven with his newly restored classics. It explores how – as the Little Tramp – Chaplin’s pioneering movie comedy finds new depths, replaying childhood traumas in THE KID and THE GOLD RUSH, spiraling into creative obsession in the making of CITY LIGHTS, protesting inequality in MODERN TIMES, before confronting the rise of fascism in THE GREAT

DICTATOR. The film reveals a figure whose creative passion was mirrored by a turbulent

personal life. And the climactic re-staging of an infamous press conference reveals how the killing of his beloved Tramp character threatens his standing with the American public, as the Hollywood press and the F.B.I. conspire to exile him from the country where he made his name. Co-directors James Spinney and Peter Middleton join us for a conversation on their revelatory and compelling look into the life and times of an immensely talented artist / comedian / writer / director / businessman who instantaneously connected with people from around the world, propelling his Tramp persona to a level of fame seldom seen.

About the filmmaker(s) – Writer/Directors – Peter Middleton & James Spinney have been working together for the past decade on a range of creative non-fiction projects. In 2014 they adapted the audio diaries of Australian theologian John Hull into a series of short films, including the Emmy Award-winning NOTES ON BLINDNESS. Their debut feature of the same name premiered at the Sundance Film Festival in 2016. It went on to earn six nominations at the British Independent Film Awards (taking home the award for Best Documentary) and was nominated for three BAFTAs, including Best Documentary and Outstanding British Film. THE REAL CHARLIE CHAPLIN will be their second feature.

Director’s Statement (edited) – It begins with his eyes. When Chaplin looks at you, he demands your attention. In a flash, there’s a feeling of intimacy, like he’s telling you a secret. It has been just over a century since people felt this connection for the first time. As moving picture houses sprung up across the world, hundreds of millions of people looked at him looking back at them from the screen. We felt it watching Chaplin’s films as students. By coincidence, we now live in the South London neighborhood where he grew up, meters from where he trained to be an acrobat. Locals still run Chaplin tours from his birthplace on East Street to the Lambeth Workhouse, where he was consigned as a 7-year-old. Every day we walked the streets that Chaplin recreated in his Hollywood studio – the streets that he returned to time and again as the Tramp. Making the film, we found ourselves searching for Chaplin in the Tramp and the Tramp in Chaplin. You can’t see one without looking at the other. In The Circus, the Tramp wanders into a mirror maze, only to find hundreds of versions of himself looking back at him. “There are more Chaplin rumors, legends, accounts, reports and beliefs than cling to many a system of religion,” wrote a journalist just a few years after he first shuffled onto the screen. Since then, his life and work has been deconstructed in hundreds of books, in dozens of languages. Chaplin’s refined voice is captured on the reel-to-reel tape recorder of LIFE Magazine reporter Richard Meryman. The 1966 recording was meant for transcription and on first playback was almost inaudible. Careful digital restoration salvaged the faint signal from the noise, transporting us to the Manoir de Ban, Chaplin’s home in the foothills of the Alps. The house is now a museum, where we restaged the interview to intercut with photographs taken of Chaplin as he told his story. “My version,” Chaplin tells Meryman, “is the most authentic one,” before describing the creation of the iconic costume. “The moment I put on those clothes, I felt so free,” he remembers. No one more embodied the transcendent ideals of silent cinema, known at the time as “visual esperanto” because it crossed continents and social barriers. The Tramp has no name, no fixed address, no family. He defies the contours of identity, blurring gender and sexuality, upending authority, and class. “Talking is an artificial thing,” Chaplin says in the LIFE interview. “Whereas movement is as near to nature as a bird flying.” These approaches are tied together by the voice of another South Londoner, our narrator Pearl Mackie, chasing these different Chaplins, real and counterfeit, rooting out imitators, impersonators and imposters. “Who is the real Charlie Chaplin?” asked newspapers as the Chaplin craze swept through America. He remains elusive, even to those closest to him. “I grew up with the icon,” his daughter Jane told us, “but I had no idea who the man was.” Listening to Jane and her siblings Geraldine, Michael and Eugene, it was moving to hear Chaplin alive in their memories, still being reprocessed, still evading grasp. In the Tramp’s universe, nothing is stable, everything is temporary. Wherever he ends up at the end of the film – whether he’s rich or poor, under a roof or out on the road – it all disappears when the credits roll. As the next film begins, the world resets. And he looks at us, like we’re seeing him for the first time. – James Spinney & Peter Middleton

“The crystal clear, cleaned up audio recordings of Chaplin and those in his orbit especially stand out.” – Kent Turner, Film-Forward.com

“”The Real Charlie Chaplin” can serve as a step forward for documentaries about film history and an exemplar for those to come: that you can appreciate art without ignoring the faults of the artist, as so many have tried to do in the past.” – Christian Blauvelt, indieWire

“Chaplin was a charmer and a scoundrel, a sweetheart and a monster, not to mention a celebrity of scandalous appetites. All of that is covered, quite ingeniously, in “The Real Charlie Chaplin.”” – Owen Gleiberman. Variety

“Combines an engaging bonanza of familiar and rarer film clips and other archival material with previously unheard audio and deft dramatic reenactments to form a cradle-to-grave account of the legend’s long and winding life.” – Gary Goldstein, Los Angeles Times