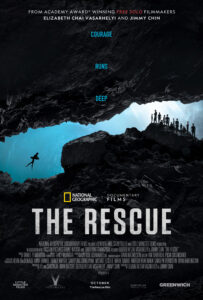 and Jimmy Chin, THE RESCUE chronicles the enthralling, against-all-odds story that transfixed the world in 2018: the daring rescue of twelve boys and their coach from deep inside a flooded cave in Northern Thailand. Award-winning directors and producers E. Chai Vasarhelyi and Jimmy Chin keep viewers on the edge of their seats as they use a wealth of never-before-seen material and exclusive interviews to piece together the high stakes mission, highlighting the efforts of the Royal Thai Navy SEALs and US Special Forces and detailing the expert cave divers’ audacious venture to dive the boys to safety. THE RESCUE brings alive one of the most perilous and extraordinary rescues in modern times, shining a light on the high-risk world of cave diving, the astounding courage and compassion of the  rescuers, and the shared humanity of the international community that united to save 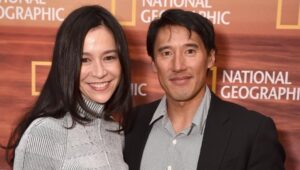 the boys. Co-directors and co-producers Elizabeth Chai Vasarhelyi and Jimmy Chin (Free Solo, Meru) join us for a conversation on the many challenges they faced telling a story the world witnessed in real-time and how bringing in the remarkable story of a team of “weekend” cave diving specialist implemented a high risk plan that not only saved the lives 12 young boys and a soccer coach but turned the headlines into a deeply human story of courage, compassion and selflessness.

For news and updates go to: films.nationalgeographic.com/the-rescue

Director’s Statement – Our films attempt to examine questions that transcend their subject matter. THE RESCUE is about an impossible rescue, but really, it’s about moral responsibility. When we have the skill set to rescue someone, do we bear the burden to do so even if we put ourselves at risk? It’s also a story about the common humanity that brings us together rather than what divides us. All these stories are about overcoming insurmountable odds. They feature unexpected heroes. And they invite the audience into specific worlds in a deep and authentic way. In THE RESCUE, that’s the world of cave diving. We wanted to make this movie for many of the same reasons that the story of the Thai children trapped in the cave captivated the hearts and minds of the world in 2018. It was an against-all-odds story that gave you hope. It brought out the best in people who united from many different nations to help these kids. There’s a line in the film that says, “Generosity is the beginning of everything,” and that’s ultimately what the film is about. We were scheduled to go to Thailand in spring 2020, but as the shoot neared, it became clear that it was too risky to travel internationally. We were dealing with different cultures, different languages, different time zones; and there were numerous constraints, but ultimately the story is still moving. The children, the cave divers, the Thai Navy SEALs, the US Special Forces and an entire community all showed us what great courage looks like. There’s a fairy-tale quality to the story. We couldn’t help but be struck by the fact that just as the boys were trapped in place in 2018, the whole world was trapped in place while we were making this movie. And yet, in 2018 the world came together to help the boys. THE RESCUE reminds us that amazing things are possible when people have integrity and a sense of responsibility for each other.  – Chai Vasarhelyi and Jimmy Chin

About the filmmaker – Elizabeth Chai Vasarhelyi (Director, Producer) is an Academy® Award-winning filmmaker. Most recently Vasarhelyi directed and produced “Free Solo,” an intimate, unflinching portrait of rock climber Alex Honnold, which was awarded a BAFTA and the Academy® Award for Best Documentary Feature in 2019. The film also received seven Emmy® awards. Vasarhelyi’s other films as a director include “Meru” (Oscars Shortlist 2016; Sundance Audience Award 2015); “Incorruptible” (Truer Than Fiction Independent Spirit Award 2016); “Youssou N’Dour: I Bring What I Love”, which premiered at the Telluride and Toronto Film Festivals; “A Normal Life” (Tribeca Film Festival, Best Documentary 2003); and “Touba” (SXSW, Special Jury Prize Best Cinematography in 2013). Vasarhelyi has directed pieces for the New York Times Op Docs, Netflix’s design series “Abstract” , ESPN’s “Enhanced” among others. She has received grants from the Sundance Institute, the Ford Foundation, the Rockefeller Brothers Fund, Bertha Britdoc, and the National Endowment of the Arts. She is a member of the DGA as well as AMPAS. She holds a B.A. in comparative literature from Princeton University and splits her time between New York City and Jackson Hole, Wyoming, with her husband Jimmy Chin, their daughter, Marina, and son, James.

About the filmmaker – Jimmy Chin (Director, Producer) is an Academy® Award-winning filmmaker, National Geographic photographer and professional climber and skier. He has led and documented cutting edge expeditions around the world for over 20 years. He has climbed and skied Mount Everest from the summit and made the coveted first ascent of the Shark’s Fin on Mount Meru. His photographs have graced the covers of National Geographic Magazine and the New York Times Magazine. Jimmy co-produces and co-directs with his wife Chai Vasarhelyi. Their film “Meru” won the Audience Award at the Sundance Film Festival in 2015 and was on the 2016 Oscar shortlist for Best Documentary Feature. Their latest documentary “Free Solo” won a BAFTA® and the Academy® Award for Best Documentary Feature in 2019, as well as seven Emmy® awards. Jimmy splits his time between New York City and Jackson Hole, Wyoming, with Chai, their daughter, Marina, and son, James.

“EXTRAORDINARY. A rousing film that celebrates humanity at its most selfless. Witnessing this profound miracle feels like receiving an overdue supply of oxygen. TRULY BREATHTAKING.” – Tomris Laffly, Variet

“CRITIC’S PICK. A riveting, immersive, stomach-in-your-throat documentary. A true life men-on-a-mission movie intense enough that even Michael Bay and Peter Berg should be able to recognize that no mega-budget dramatization could match up to it.” – David Ehrlich, IndieWire