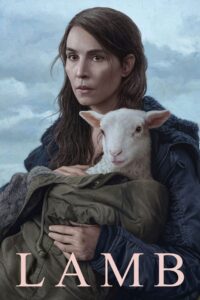 the story of a childless Icelandic couple, Maria (Noomi Rapace) and Ingvar (Hilmir Snær Guðnason) living with their herd of sheep on a beautiful but remote farm. When they discover a mysterious newborn on their farmland, they decide to keep it and raise it as their own. This unexpected prospect of a new family brings them much joy. They soon face the  consequences of defying the will of nature, in

this dark and malevolent folktale from director and co-writer Valdimar Jóhannsson in his striking feature film debut. Director Valdimar Johannsson joins us for a conversation on the organ for this unusual tale and the willingness of his cast and crew to commit themselves an insidious fantasy that manifests itself with its own set of vindictive rules.

For news and updates go to: a24films.com/films/lamb

To watch LAMB go to: tickets.lamb.movie

“A film that proves just how far disbelief can be suspended if you’re in the hands of a director – and a cast, and an SFX/puppetry department – who really commit to the bit.” Jessica Kiang, Variety

“Lamb is a disturbing experience but also a highly original take on the anxieties of being a parent, a tale in which nature plus nurture yields a nightmare.” – David Rooney, Hollywood Reporter

“The majority of the picture is strong enough to satisfy audiences with a taste for folk horror oddities, even if the ending isn’t quite as punchy as one might have anticipated.” – Wendy Ide, Screen International

“An emotional film that will stick with you long after it has ended. Powerful performances.” – Nathaniel Muir, AIPT