Director Pushpendra Singh’s latest film, THE SHEPHERDESS AND THE 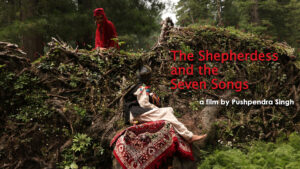 SEVEN SONGS is a stunningly beautiful feminist fable set in the disputed territory of Jammu and Kashmir, a lush mountainous region claimed by both India and Pakistan. Based on a folktale by Rajasthani writer Vidaydan Detha as well as the life and poetry of 14th century Kashmiri mystic Lalleshwari, SHEPHERDESS follows a young bride, Laila (Navjot Randhawa, in a ferocious and unforgettable performance) who marries into a

tribe of nomadic Bakarwal herders. Already harassed by local police as a minority, Laila finds herself targeted for her remarkable beauty by local officials. Her implacable and ingenious manipulation of the men who want to possess her, and 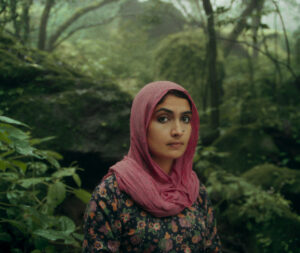 the patriarchy that wants to crush her, plays out in a series of seven chapters – the Song of Regret, the Song of Playfulness – each tied into the rapturously gorgeous score by Naren Chandavarkar and Benedict Taylor. Like the mystical films of Sergei Parajanov, Singh weaves breathtaking visuals and music into a hypnotic and indelible experience. The film’s truly cosmic climax, where Laila attempts to shed the bonds of male desire and infatuation pursuing her,  must be seen to be believed.  Award winning director and writer Pushpendra Singh joins us for a conversation on the orgin story for The Shepherdess and the Seven Songs, casting Navjot Randhawa in the title role, and beautifully shooting the film in a way that focuses on the context of the story as a way of bringing the content to life.

For updates go to: deafcrocodile.com/shepherdess-the-seven-songs

Director’s Statement – “I was inspired by the feminist ideas in this folktale by Vijaydan Detha but wanted to make it as a contemporary story. I have always been interested in a folk aesthetic and am always fascinated to find connections in different folk cultures which highlight how oral traditions have traveled across the world over centuries. The ending of this folk tale reminded me of Lal Ded, the 14th century mystic poetess from Kashmir and this led me to adapt it there. We shot the film with the migration cycle of the Bakarwal nomads in three schedules in different seasons. ” – Pushendra Singh

About the filmmaker – Born in Sainyaa, near Agra, India in 1978. After studying at the Film and Television Institute of India in Pune, he first worked as an actor and assistant director. In 2014, his directorial debut Lajwanti  screened in the Berlinale Forum. His second feature film, Ashwatthama, premiered in the New Currents Competition at the Busan International Film Festival while his hybrid film Maru ro moti was shown at the International Documentary Film Festival Amsterdam.  His fourth feature is, THE SHEPHERDESS AND THE SEVEN SONGS is the second of Singh’s films to be based on the works of celebrated Rajasthani writer Vidaydan Detha, taking inspiration from 14th-century Kashmiri mystic poetess Lalla Arifa Lalleshwari and folk storytelling traditions of the Bakharwal community in Kashmir.

“The film speaks lyrically to a peoples’ determination to find a meaningful way to live in a rapidly changing modern world.” – Derek Smith, Slant Magazine

“The Shepherdess and the Seven Songs feels like a fairy-tale that deals with all-too-real events. Yet Singh ensures that the plot never veers too far into either surrealism or realism.” – Alex Saveliev, Film Threat