Deep in the forests of Piedmont, Italy, a handful of men, seventy or eighty 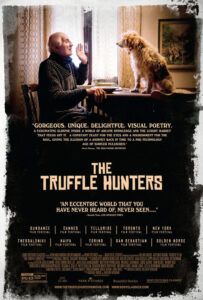 years young, hunt for the rare and expensive white Alba truffle—which to date has resisted all of modern science’s efforts at cultivation. They’re guided by a secret culture and training passed down through generations, as well as by the noses of their cherished and expertly-trained dogs. Co-directors Michael Dweck and Gregory Kershaw (The Last Race) seamlessly navigates viewers through an enigmatic world where the denizens live a simpler, slower way of life, in harmony with their loyal animals and their picture-perfect land, seemingly straight out of a fairy tale. They’re untethered to cell phone screens or the Internet, opting instead to make their  food and drink by hand and prioritizing in-person connections and community. The

demand for white truffles increases year after year, even as the supply decreases. As a result of climate change, deforestation, and the lack of young people taking up the mantle, the truffle hunters’ secrets are

more coveted than ever. However, as it soon becomes clear, these aging men may just hold something much more valuable than even this prized delicacy: the secret to a rich and meaningful life. Co-directors Michael Dweck and Gregory Kershaw (The Last Race) join us to talk about their immersion into a very closed, arcane multi-tiered society that dates back hundreds of years and the impact that modernity and climate disruption is having on this enchanting corner of the world.

For news, updates and screenings go to: sonyclassics.com/thetrufflehunters

About the filmmakers – Michael Dweck is an award-winning American filmmaker and contemporary visual artist. Best recognized for his evocative narrative photography, Dweck artistically investigates the on-going struggles between identity and adaptation found within endangered societal enclaves. Dweck’s works have been featured in solo and group exhibitions at museums and galleries worldwide, and are part of prestigious international art collections, including the archive of the Department of Film at The Museum of Modern Art in New York, where two of his long-form television pieces reside.In his first feature-length film, “The Last Race” (Sundance US Documentary Competition 2018), Dweck extended his exploratory repertoire by combining observational documentary, stylized imagery, and a symphonic merging of motion and sound. Experimenting with both form and subject matter, Dweck highlights the mysterious beauty and exuberant passion shared by the last custodians of a disappearing tradition. Aside from creating an artistic appraisal of class and American identity, Dweck’s film allegorizes the broader, global epidemic wherein handmade objects and ritualistic traditions face extinction at the hands of mass conglomerate takeover. For more go to: michaeldweck.co

About the filmmaker – Gregory Kershaw has worked on narrative and documentary film productions as a producer, cinematographer, and director. Most recently, he was a senior producer at Fusion television where he made environmental documentaries. His work explored the impact of climate change on indigenous populations throughout Latin America in a series of United Nations Foundation funded videos, as well as long form documentaries on the global species extinction crisis featuring environmental luminaries such as Jane Goodall and Sylvia Earle. Gregory is a graduate of Columbia University’s MFA film program.

“A scrumptious cinematic journey. Try not to fall hard for the joy it spreads.” – Tomris Laffly, VARIETY

“Gorgeous. Unique. Delightful. Visual Poetry. A fascinating glimpse inside a world of arcane knowledge and the luxury market that feeds off it. A constant feast for the eyes and a nourishment for the soul, giving the illusion of a journey back in time to a pre-technology age of simpler pleasures.” – David Rooney, THE HOLLYWOOD REPORTER

“An eccentric world that you have never heard of, never seen…” – Kenneth Turan, LOS ANGELES TIMES

“It’s a sweet and simple movie with a healthy dose of bittersweet wistfulness for a fading world, and it’s beautiful.” – Alissa Wilkinson,Vox

“This is a sensuous plunge into a world that’s built on simple pleasures.” – Amber Wilkinson, Eye for Film