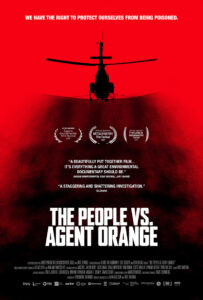 bares the dioxin-based defoliant, insecticide, Agent Orange catastrophe did not end with the Vietnam War. Today, the world over, a primary chemical of the toxic defoliant controls weeds in farming, forestry, parks, even on children’s playgrounds. Agent Orange wreaks havoc on the human genome, causing deformed births and deadly cancers. After decades of struggle and tragic personal losses, two heroic women are leading a worldwide movement to end the plague and hold the manufacturers accountable. In France, Tran To Nga is suing the American chemical industry for poisoning her in Vietnam. In America, Carol Van Strum exposes the continuing use of toxic herbicides in the Pacific Northwest. Incriminating

documents disappear. Activists are threatened. A helicopter technician secretly films the contamination of reservoirs, while a massive industrial cover-up goes on. The People vs. Agent Orange co-directors Alan Adelson and Kate Taverna join us for a conversation on the journey of two women, joned together in their mutual pain, resist intimidation and threats, bringing to light the ongoing, intergenerational catastrophe of chemical warfare and toxic herbicides in the hope of bringing the manufacturers and business related perpetrators to justice.

For news and updates go to: javafilms.film/the-people-vs-agent-orange

About the filmmakers: Kate Taverna and Alan Adelson produced and co-­directed In Bed with Ulysses as well as Lodz Ghetto, both of these widely acclaimed films had nationwide theatrical releases. Lodz Ghetto was short-listed for the Best Feature Documentary Oscar. Adelson and Taverna also collaborated on Two Villages in Kosovo, In Bed with Ulysses and Agent Orange: La derniere bataille, an adaptation of The People vs. Agent Orange made for Arte in French and German. Alan Adelson works in both film and print: as a page-one investigative reporter for the Wall Street Journal and national magazines he made worldwide headlines exposing the disappearance of enough enriched plutonium to make two Hiroshima-sized bombs. Early in his journalistic career he published investigative articles on the chemical industry. Kate Taverna has edited more than 50 films over her career: Asylum and Killing in the Name were the Academy Award nominees in the Best Short documentary category in 2004 and 2011 respectively. The feature length Pray the Devil Back to Hell won the Best Documentary award at the 2008 Tribeca Film Festival. She’s Beautiful When She’s Angry won the Audience award at the 2014 Boston Independent Film Festival, released theatrically nationwide and was translated into 22 languages andshown globally on Netflix.Her broadcast editing work has been seen on CBS, IFC, A&E, BBC and PBS, among others.

Films for Humanity is proud to present the US virtual theatrical release of THE PEOPLE vs AGENT ORANGE, a documentary film by Kate Taverna and Alan Adelson. Winner of the Jury Award at the 2020 Eugene Environmental Film Festival, the film will have a virtual release at the New Plaza Cinema in New York, at Laemmle Theaters in Los Angeles and in other cities on March 5, 2021