In the world of Anmaere, north of the city of Whithren, wild horses run through 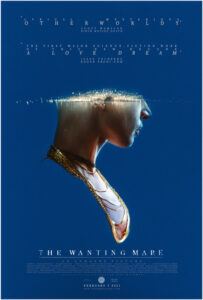 the moorlands and up the coast. These horses are the city’s most valuable export and, as a result, are hunted, trapped, sold, and shipped across the sea once a year. For those in Whithren, this trade passage creates lucrative and exciting possibilities: the chance to escape their constantly sweltering city and escape to the Western continent of Levithen, or simply to begin again. Nothing can prepare audiences for the secrets, seduction, and sights of THE WANTING MARE, an intimate, dramatic fantasy epic written and directed by renowned digital artist Nicholas Ashe Bateman (visual effects supervisor of David Lowery’s upcoming The

Green Knight). A technical marvel of digital world-building and independent ambition, the sprawling vistas, fantastical sights, and otherworldly tableaus of THE WANTING MARE were lensed almost entirely inside a warehouse in Paterson, New Jersey. Director, writer, and editor Nicholas Ashe Bateman joins us to talk about the five year journey of making THE WANTING MARE, the defining connection humans and horses share, the support he received from a dedicated group of friends and filmmakers, and the importance of Carl Jung.

For news, updates and screenings go to: anmaerepictures.com/thewantingmare

THE WANTING MARE opens nationwide on Friday, February 5th, 2021, and will be accompanied by a half-hour making-of documentary available online.