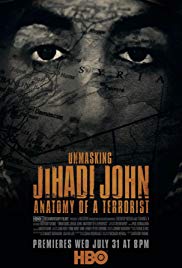 ahead of him in 1995. By 2014, he had become known as “Jihadi John,” a masked ISIS terrorist in Syria who internationalized his notoriety by broadcasting his beheadings of Western hostages on the internet. UNMASKING JIHADI JOHN: ANATOMY OF A TERRORIST includes rare footage of Emwazi as a young boy in London and interviews with his schoolteachers who reveal that he lived a relatively comfortable and normal childhood. His behavior grew more disconcerting in his teenage years.

Emwazi’s brutality is illustrated through harrowing, first-hand accounts from his surviving hostages, and the collaboration between the world’s leading intelligence agencies, including the CIA and Britain’s intelligence agents, who ultimately tracked him down and ended his life.  UNMASKING JIHADI JOHN: ANATOMY OF A TERRORIST examines what

propelled Emwazi’s journey down a violent path despite US and British authorities being aware of his extremism. It also highlights the self-declared operational failures by counter-terrorism officials as

Emwazi became ISIS’s chief executioner and propagandist.  Joining us on Film School Radio will be Oscar®-nominated, BAFTA and Emmy®-winning director Anthony Wonke (HBO’s “The Battle for Marjah”), and BAFTA-winning producer and investigative journalist Richard Kerbaj for a conversation on the how and why a schoolboy and promising soccer player morphs into a sadistic killer.

For news and updates go to: hbo.com/documentaries

“This is a superior doc, just know when to briefly look away.” – Anne Brodie, What She Said

“Part high-tech manhunt and part brutal captivity narrative, “Unmasking Jihadi John: The Anatomy of a Terrorist” is one documentary unlikely to leave anyone in its viewing audience bored.” – David Zurawik, Baltimore Sun

“This is a film that spends much of its time on observation and analysis of the known facts… This makes it feel rather dry in places but avoids any glamorisation of its subject.” – Jennie Kermode, Eye for Film

“In terms of cinematography and editing, Jihadi John: Anatomy of a Terrorist is well-executed, and it’s certainly informative.” – Amy Glynn, Paste Magazine