Based on the acclaimed graphic novel “Samurai Shiro” by Danilo 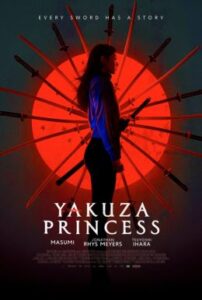 Beyruth and set in the expansive Japanese community of Sao Paulo, Brazil — the largest Japanese diaspora in the world — YAKUZA PRINCESS follows orphan Akemi, played by pop star MASUMI, who, upon turning 21, discovers that she is the heiress to half of Japan’s expansive Yakuza crime syndicate. After forging an uneasy alliance with an amnesiac stranger, Shiro, played by Jonathan Rhys Meyers (History Channel’s The Vikings) who believes an ancient sword binds their two fates, Akemi

unleashes war against the other half of the syndicate who wants her dead.  Starring MASUMI, an emerging talent starring in her first film role, as well as Rhys Meyers, Tsuyoshi Ihara, Toshiji Takeshima, Eijiro Ozaki, and Charles Paraventi. Lead actor Masumi joins us to talk about this rip-roaring, violent action-thriller from director and co-writer Vicente Amorim, as well as how and why she decided to make the jump from music to movies, and how the training for the role of Akemi helped transform her into a princess.

For screenings and updates go to: yakuzaprincessfilm.com

To watch go to: magnetreleasingfilms.com/nowplaying

About the actor – MASUMI is a child of both Japan and the US. Born in Palos Verdes, California, her formative years saw her move between Tokyo, New York, Washington DC, and finally Dallas – where she began her singing and songwriting career. After a short period in Japan, she enrolled in the Los Angeles College of Music. Masumi has performed internationally in Sweden, NY, Italy, Tokyo. In 2019, she has started her acting career and was offered the title role in the Warner Brothers film, “Yakuza Princess” – her first feature and also her first protagonist role – in which she speaks both English and Japanese.

Director’s Statement – Yakuza Princess is a thriller with a very strong emotional drive. This drive is powered by Akemi, who comes of age while having to learn how to fight (quite literally) and becoming who she was always meant to be. The film showcases a very complex, broken, family dynamic, with themes such as identity and belonging, the longing for (and rejection of) a father- figure as pivot points around which we see her trajectory unfold. The Yakuza Princess brings strong Japanese elements from the jidaigeki tradition of masters such as Mizoguchi or Kurosawa, the vibrant aesthetics of animes such as Akira and the violence derived from the new Ronin classics by Takashi Miike and Takeshi Kitano. As in those films, no punches are pulled. The Japanese neighborhood’s settings in São Paulo play a major role in the choreography of chases, fights and shootouts. Brazil’s own clique of the Yakuza, its corrupt police, and its own brand of domestic violence are present in the fringes of a greater, very elaborate, action canvas that will be grounded in the character’s traits and will lead their arcs. The sword heightens the film’s supernatural tone. The Muramasa is at the heart of the quest Akemi has to go through. It is a cursed, blood-thirsty weapon, that when wielded by Akemi transforms her into a killing machine and, nonetheless, helps her bridge the gap into fulfilling her destiny, even if it has a (very) dark side to it. In a movie where no one is really who they seem to be, we tell the story through reflections, transparencies and layers that veil and disguise the characters’ every move. We have built a desaturated version of the 90s neon noir, without its corny excesses. On one hand, we are welcome by a sense of familiarity and, on the other, like Akemi herself, we’ll be waking from a long nightmare – one that we do not control, one that only Akemi can end with the power she discovers to have when the Muramasa (the cursed samurai sword) is in her hands. – Vicente Amorim

About the filmmaker – Director Vicente Amorim is one of the most acclaimed Brazilian directors today. He has helmed ten feature films and five TV series. He has debuted as a director with the feature The Middle Of The World (2003). Among his films are the international A Good Man (2008), starring Viggo Mortensen; and the action thrillers Motorrad (2017) and The Division (2020), the latter also adapted for a TV series. Yakuza Princess is his second feature film with an international cast and crew. Presently, he is in post-production of his third international feature, the drama Duetto, shot in Brazil and Italy, with a mixed cast including Michelle Morrone (365 Days) and Giancarlo Giannini (007 – Quantum of Solace).

“There are several moments of bold and bloody action, but it doesn’t hinge everything on stunt sequences, enabling the film to take its power from [character] Akemi’s emotional journey.” – Douglas Davidson, Elements of Madness