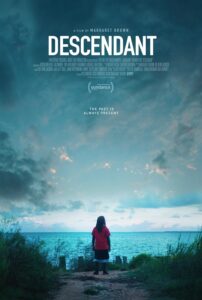 Brown returns to her hometown of Mobile, Alabama to document the search for and historic discovery of the Clotilda, the last known slave ship to arrive in the United States. DESCENDANT deftly examines more than 160 years of the complicated history, secrecy and speculation surrounding the 2019 discovery of the Clotilda and the seismic impact it has on the descendant community of Africatown. DESCENDANT presents a moving portrait of a community actively grappling with slavery’s legacy and fighting to preserve their heritage while examining what justice looks like in a

country unwilling to fully acknowledge the evil and trauma wrought by the institutional bondage inflicted upon millions of human beings. Director Margaret Brown (The Order of Myths, The Great Invisible) joins us for a

conversation on why she made the decision to go back to her hometown, why the story of the Clotilda still resonates with the residents of Africatown, the importance of Gudjol Lewis, the lasting impact that author Zara Neale Hurston’s  Barracoon: The Story of the Last ‘Black Cargo’ has had in dispelling the racist lies while resurrecting the truth about this incredibly resilient community.

To watch go to: netflix.com/Descendant

About the filmmaker – Margaret Brown received the Truer Than Fiction Award at the 2009 Spirit Awards for her second documentary feature The Order Of Myths, which was also nominated in the Best Documentary category. Brown’s first feature was the acclaimed documentary Be Here To Love Me: A Film About Townes Van Zandt, which was released in the United States by Palm Pictures and received worldwide theatrical distribution in 2005. In 2014, Brown directed the feature documentary The Great Invisible which won the SXSW Grand Jury Prize for Documentary and received an Emmy  nomination for Exceptional Merit in Documentary Filmmaking. The Great Invisible features the BP oil spill in the Gulf in 2010 and  Deepwater Horizon oil spill aftermath. Brown’s documentary film, Descendant, explores issues of equity and justice facing descendants of the last US slave ship Clotilda, as well as the discovery of the sunken ship in 2019.  A special jury prize winner at the 2022 Sundance Film Festival, Descendant will be distributed in 2022 by Netflix and Higher Ground, the film production company of former president Barack Obama and Michelle Obama. Brown earned her BA from Brown University in Creative Writing and her MFA in Film from New York University

“One of the best films of the year… Brown roves across the land, crowding her film with a wide spectrum of voices for a living oral history that reckons with the long shadow of slavery.” – Jake Coyle, Associated Press

“Descendant is worth seeing no matter who you are. For viewers like me, however, it engenders the reality that, no matter how hard anyone tries to whitewash history, our stories will forever continue to be told in full, by us and for us.” – Odie Henderson, RogerEbert.com

“We’re in for something different here, is the film’s opening gambit. It’s an unspoken promise that Descendent lives up to.” – Lauren Mechling, Guardian

‘”Descendant” doesn’t provide easy answers for how individuals and governments can begin to grapple with this history, but it begins with the acknowledgment that its history will live on.”’ – Christian Gallichio, The Playlist