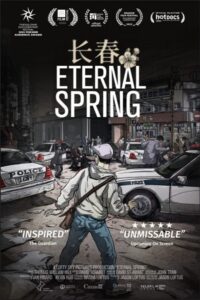 spiritual group and the incident that brought down the wrath of the Chinese government. In March 2002, a state TV signal in China was hijacked by members of the banned spiritual group Falun Gong. Their goal is to counter the government narrative about their practice. In the aftermath, police raids sweep Changchun City, and comic book illustrator Daxiong (Justice League, Star Wars), a Falun Gong practitioner, is forced to flee. He arrives in North America, blaming the hijacking for worsening a violent repression. But his views are challenged when he meets the lone surviving participant to have escaped China, now living in Seoul, South Korea. Combining present-day

footage with 3D animation inspired by Daxiong’s art, Eternal Spring retraces the event on its 20th anniversary, and brings to life an unprecedented story of defiance, harrowing eyewitness accounts of persecution, and an exhilarating tale of determination to speak up for political and religious freedoms, no matter the cost. Director Jason Loftus (Ask Know Questions) joins us for a conversation on the history and the suppression of Falun Gong, how the group of members came together, working with Daxiong and the current political climate in China and his continuing work to uncover the repressive actions of that government through his films.

For more go to: eternalspringfilm.com

About the filmmaker – Director / Producer Jason Lofton is a Peabody Award-winning filmmaker and four-time Canadian Screen Award nominee, Jason’s work spans documentary, docuseries, virtual reality, narrative games, and animation. Jason produced the docuseries on Chinese cuisine, Confucius Was a Foodie, which was named Best Food Series on TV at the 2021 Taste Awards. It has aired in over 100 territories worldwide, including on PBS stations across the US and NatGeo People Asia. Jason’s directorial debut in a documentary feature, together with Eric Pedicelli, was called Ask No Questions and premiered in competition at Slamdance in 2020. It won the Copper Wing (Best World Cinema) at the Phoenix Film Festival, was endorsed by artist Ai Weiwei, and was nominated by Film Threat as 2021’s Best Socially Relevant Documentary, among other honors. Eternal Spring is Jason’s follow-up to Ask No Questions and his second documentary feature as director.

“A vivid, troubling documentary that reconstructs how Chinese activists hijacked the airwaves of state TV in the northeastern city of Changchun in March 2002” – Cath Clarke, Guardian

“Distinctively incisive on an emotional level, the film applauds the bravery of its participants to relive a painful shared trauma and create a permanent testament of what they endured.” – Carlos Aguilar, Los Angeles Times

“Jason Loftus and Daxiong’s work is profoundly moving. Social realities in China are dispiriting but help us remember the humanity that links us all. The day after Eternal Spring was announced as Canada’s Oscar contender, China banned Daxiong’s books.” – Anne Brodie, What She Said