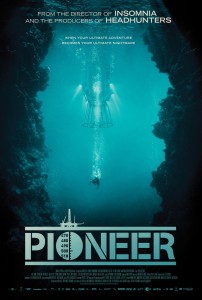 PIONEER is set in the early 80’s, at the beginning of the Norwegian Oil Boom. Enormous oil and gas deposits are discovered in the North Sea, authorities aim to bring the oil ashore through a pipeline 500 meters deep. Petter, a professional diver, is obsessed with reaching the bottom of the Norwegian Sea. Along with his brother Knut, he has the discipline, strength and courage to take on the world’s most dangerous mission. But a sudden, tragic accident changes everything. Petter is sent on a perilous journey where he loses sight of who is pulling the strings. Gradually, he realizes that he is in way over his head and that his life is at stake. Director and writer Erik Skjolbjaerg talks about his take on a brief but important era in Norwegian history and the challenge of working underwater and directing an international cast.

For news and updates on Pioneer go to: magpictures.com/pioneer

“A twisty tale of life and death under pressure.” – Variety

“Director Erik Skjoldbjærg’s film offers an amazing opportunity to experience the dark depths of the ocean, while paying homage to 1980s filmmaking.” – Under the Radar

“The underwater sequences stun and terrify – nothing says claustrophobia quite like two weeks in a pressurized diving bell with someone you can’t necessarily trust – and there’s almost as much moisture and terror on land to drive Petter round the bend.” – Ella Taylor, NPR

“A brooding psychological drama where everything that happens is open to multiple interpretations and figuring out who if anyone is on your side gets harder and harder to do.” – Kenneth Turan, Los Angeles Times