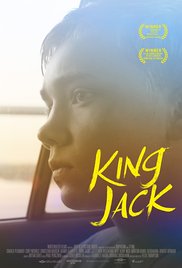 KING JACK is the story of a scrappy fifteen year-old kid, Jack, stuck in a run-down small town. Trapped in a violent feud with a cruel older bully and facing another bout of summer school, Jack’s got all the problems he can handle. So when Jack’s aunt falls ill and his runty younger cousin must stay with him for the weekend the last thing Jack wants to do is look after him. Unfortunately no one really cares what Jack wants. Set over a hazy summer weekend, KING JACK is a tough and tender coming of age story about friendship and finding happiness in rough surroundings. It feature a terrific ensemble cast of young actors headed up by an beautifully realized performance from Charlie Plummer, as Jack. Director Felix Thompson previous short films have been in competition at festivals such as SXSW, Tribeca and the BFI’s London Film Festival. His first short film “Bedford Park Boulevard” was awarded a grant from the National Board of Review and also picked up the top prizes at NYU’s First Run Film Festival in 2010. KING JACK is his first feature film and was selected for the Sundance Creative Producing Labs along with producer Gabrielle Nadig. Director Felix Thompson joins us to talk about his honest, gritty, award winning feature film debut.

For news and updates go to: kingjackmovie.com

“Thompson’s leads are so natural in their roles, and his filmmaking is so immediate and intimate, that King Jack is instantly absorbing.” = Tasha Robinson, The Verge

“For everyone who ever had a close call as an adolescent and kept it from the grown-ups, “King Jack” will hit you where you live.” – Helen T. Verongos, New York Times

“An exceptionally powerful coming-of-age story that pairs the charm and heart we’ve come to expect from the genre with some especially intense and brutal drama.” – Perri Nemiroff, Collider