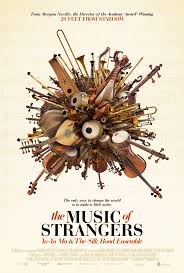 THE MUSIC OF STRANGERS: YO-YO MA AND THE SILK ROAD ENSEMBLE follows an ever-changing lineup of performers drawn from the ensemble’s more than 50 instrumentalists, vocalists, composers, arrangers, visual artists and storytellers as they gather in locations across the world, exploring the ways art can both preserve traditions and shape cultural evolution. Over the past 16 years, an extraordinary group of musicians has come together to celebrate the universal power of music. Named for the ancient trade route linking Asia, Africa and Europe, The Silk Road Ensemble, an international collective created by acclaimed cellist Yo-Yo Ma, exemplifies music’s ability to blur geographical boundaries, blend disparate cultures and inspire hope for both artists and audiences.  Blending performance footage, personal interviews and archival film, Academy Award winning director of 20 FEET FROM STARDOM Morgan Neville (Cool School, Beauty is Embarrassing, Respect Yourself: The Stax Records Story, Best of Enemies) and producer Caitrin Rogers focus on the journeys of a small group of Silk Road Ensemble mainstays from across the globe to create an intensely personal chronicle of passion, talent and sacrifice.

For news and update go to:themusicofstrangers.film

“Neville is keenly aware of how to show the musicians’ kinetic energy onscreen, and he relies on this talent to keep the film consistently alive and moving.” – Tina Hassannia, Rogertebert.com

“Neville is as expert at getting the human stories behind the songs as he is in capturing the music.” – Kenneth Turan, LA Times

“Morgan Neville’s documentary is a joyous revelation, a group portrait of superb musicians from all over the world offering music as an emblem of what people can do in these fractious times when they live in concert with one another.” – Joe Morgenstern, Wall Street Journal