Director and cinematographer Reid Davenport reaches out through the lens of his camera as a visibly disabled person, determi 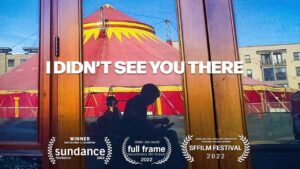 ned to make a film about how he sees the world, from either his wheelchair or his two feet, without having to be seen himself. The unexpected arrival of a circus tent outside his Oakland, California apartment in leads him to consider the complicated history and legacy of Phineas Taylor Barnum’s or P.T.  Barnum’s Freak Show and its lingering presence in his daily life in the form of gawking, lack of access, and other forms of ableism. Informed by his

position in space, lower to the ground, Davenport captures indelible images, often abstracted into shapes and patterns separate from their meaning. But the circus tent looms in the background, and is reverberated by tangible on-screen

interruptions, from unsolicited offers of help to careless blocking of ramps. Personal and unflinching, I Didn’t See You There forces the viewer to confront the spectacle and invisibility of disability. Director Reid Davenport joins us to offer both a perspective and stylistic approach that are rarely seen, Reid brings an urgently needed storytelling eye to filmmaking with a documentary that is powerful and emotional, thoughtful and raw, intimate and political.

For updates & screenings go to: ididntseeyoutherefilm.com

About the filmmaker – Director, Director of Photography Reid Davenport makes documentaries about disability from an overtly political perspective. Reid’s first feature film, I Didn’t See You There, will premiere in the U.S. Documentary Competition at the 2022 Sundance Film Festival. His 2016 short film, A Cerebral Game, won the Artistic Vision Award at the 2016 Big Sky Documentary Film Festival for “creating a visual landscape that is at once disorienting and nostalgic – and the result is so raw and compelling it’s impossible to turn away.” Wheelchair Diaries and RAMPED UP, are distributed by New Day Films. He is currently in production of another feature film, which is being produced by Multitude Films. Reid’s work has been supported by The Ford Foundation, Sundance Institute, Creative Capital, XTR, ITVS, NBCU, CNN and the Points North Institute, among others. In 2020, he was named to DOC NYC’s “40 Filmmakers Under 40.” In 2017, Reid was a TED fellow and gave a TED Talk about incorporating his own literal body into his filmmaking. His work has been featured by outlets like NPR, PBS, The Washington Post, MSNBC, and The Chronicle of Higher Education. Davenport received a Master of Fine Arts in Documentary Film & Video from Stanford University in 2016, and a Bachelor of Arts in Journalism and Mass Communication from The George Washington University in 2012.

“With his feature, Davenport stakes out his own vantage point on the world, one that leaves a viewer wishing to hear his thoughts elaborated even further.” – Nicolas Rapold, New York Times

“A strong reminder that telling the truth about your existence is not merely a political act, but a gift (if we choose to accept it).” – Sarah Manvel, Critic’s Notebook

“[Reid Davenport] narrates the film, a sometimes funny and sometimes furious window into the casual inconveniences and less casual indignities he runs into in a world not built for him… It’s a must-see.” – Alissa Wilkinson Vox