“To A More Perfect Union: U.S. V. Windsor” shares a rich tapestry of love, marriage, and a fight for equality. The film chronicles unlikely heroes — octogenarian Edie Windsor and her 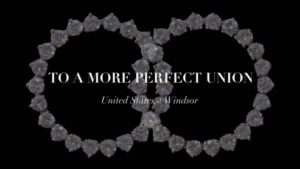 attorney, Roberta Kaplan, on their quest for justice. Upon the death of her spouse Thea Spyer, Windsor was forced to pay a huge estate tax bill because the government denied federal benefits to same-sex couples. Windsor became a renowned LGBTQ civil rights advocate when she chose to sue the United States government to recognize her more than 40 year union– and  won Windsor and Kaplan’s legal and personal journeys go beyond the story of this pivotal case in the marriage equality movement as Zaccaro tells the story of our journey as a culture, and as a country

For news and updates go to: perfectunionfilm.com

“The film reminds us that there are individual human experiences behind the legal decisions that impact an entire country.” – Kimberly Myers, Los Angeles Times

“The film’s quiet confidence in an evolved America only tells half the story; as a result, it already feels like more like a prologue than a happy ending.” – Matthew Monagle, Ausin Chronicle