UNA, based on David Harrower’s play ‘Blackbird’ follows a young woman’s journey to reclaim her past. Fifteen years earlier, UNA ran away with an older man, Ray, a 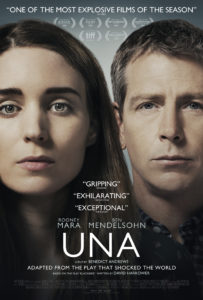 crime for which he was arrested and imprisoned. When she comes across a photo of him in a trade magazine, UNA tracks him down and turns up at his workplace. Her abrupt arrival threatens to destroy Ray’s new life and derail her stability. Unspoken secrets and buried memories surface as Una and Ray sift through the wreckage of the past. Their confrontation raises unanswered questions and unresolved longings. It will shake them both to the core. UNA gazes into the heart of a devastating form of love and asks if redemption is possible. Bolstered by the remarkable performances of Rooney Mara and Ben Mendelson, UNA rips at the fragile facade of two irreparably damaged people forced to reconcile entangled their past. Director Benedict Andrews talks about the making of his complex, intimate and relentlessly raw tale of abuse, and unresolved emotion.

For news and updates go to: westendfilms.com/una

“Una is an inquiry into the complicated bond between a predator and his prey. Yet Harrower does not play monsters and victims.” Ella Taylor, NPR

“Be warned: the film — perhaps unsurprisingly — is heading somewhere pretty dark, but you can’t fail to be impressed by this cleverly constructed and brilliantly acted piece.” Matthew Bond, The Mail

“What gives Una its unnerving tension is not just the skill of these two performers locked together in their unsettling combat, but the realization that no matter what she ends up doing to him, it won’t fix what has already nearly destroyed her.” – Chris Barsanti, Pop Matters