DINA, an outspoken and eccentric 49-year-old in suburban Philadelphia, invites her fiancé Scott, a Walmart door greeter, to move in with her. Having grown up 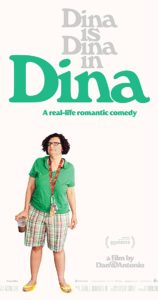 neurologically diverse in a world blind to the value of their experience, the two are head-over-heels for one another, but shacking up poses a new challenge. Getting married in a few weeks and there’s still so much to do. She has to move her boyfriend, Scott, from his parents’ house to her apartment, and settle him in to only the second home he’s ever had, all while juggling his schedule as an early morning Walmart door greeter. She has to get her dress, confirm arrangements with the venue, and make peace with her family, who remain nervous for their beloved DINA, after the death of her first husband and the string of troubled relationships that followed. Throughout it all, in the face of obstacles large and small, DINA, remains indomitable. She’s overcome tragedy and found the man she wants and is bent on building the life for herself that she believes she deserves. DINA captures the cadences and candid conversations of a relationship that reexamines the notion of love on-screen. DINA is unstoppable, a force of nature, and as the star of her own life story, she’s an unconventional movie protagonist the likes of which hasn’t been seen before. Co-directors Antonio Santini and Dan Sickle join us to talk about their empathetic, moving and enveloping documentary.

For news and updates go to: dina.film

“DINA comes from a deep place of love…Alternately comic and tragic and best when its both at once, DINA humanizes a world of people who were only dehumanized because we allowed them to be… Whereas most docs about ‘different’ people are content to flatter our empathy, DINA aims to deepen it.” – David Ehrlich, IndieWire

“We come to understand that the camera’s distance from its subjects as an act of respect that allows the complex, funny, and indomitable personalities to shine through.” – Christopher Gray, Slant Magazine

“A sensitive snapshot of two ordinary people on the autism spectrum who are determined to carve out a meaningful future together.” – David Rooney, Hollywood Reporter

“The rapport between the filmmakers and their principal characters is so comfortable, it occasionally feels as if we are watching a scripted film.” – Peter DeBruge, Variety