Blood Stripe: A scarlet stripe that runs down the dress trousers worn by officers of the United States Marine Corps

Our Sergeant returns home after a third tour with the Marines. Unable to sleep, 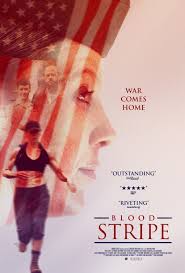 wracked by paranoia and anxiety, it is clear that in addition to the scars she bears on her body, Our Sergeant carries unseen wounds. When a boisterous homecoming party provokes an explosive outburst, Our Sergeant has nowhere to turn, and so she runs… deep into the North Woods. Discovering a picturesque summer camp on a lake, Our Sergeant seeks refuge and at first, finds solace. But she cannot outrun her own heart of darkness and the pristine wilderness becomes fraught with peril. Actor (Weeds, Veep) and director and writer Remy Auberjonois joins us for a conversation on his compelling and complex portrait of a returning soldier (Kate Nowlin) on the brink.

For news and updates go to: bloodstripefilm.com

“5 stars. One of the best movies I’ve seen in a long time. ‘Blood Stripe’ is a towering achievement.” – James McDonald, Irish Film Critic

“A strong performance by Kate Nowlin as a U.S. Marine returning from her latest tour of duty in Afghanistan fuels this study of post-traumatic stress disorder, though the strength of actor Remy Auberjonois’ tense and troubling directing debut lies in its rejection of easy diagnoses.” – Justin Chang, LA Times

“Nowlin breathes life into an atypical female anti-hero, presenting a different kind of woman rarely seen on screen. Bringing both an intimidating physicality and a keen sense of fragility, her performance sells the film’s emotional authenticity and gives it a humane depth that draws us deep into her character’s haunted world. Simply put, her performance feels like lighting in a bottle.” – CromeYellow