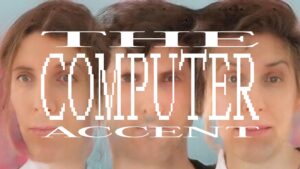 COMPUTER ACCENT, is a documentary following the boundary-pushing pop group YACHT as they try something terrifying and new: handing over the reins of their entire creative process to ARTIFICIAL INTELLIGENCE. Working with technologists and leading AI

YACHT are guides through the brave new world of machine intelligence. Along the way, they’ll question their own roles in a future where software anticipates, generates, and synthesizes human work. Co-directors Sebastian Pardo (ACTRESS, ALL LIGHT, EVERYWHERE, ANOTHER EVIL)  and Riel Roch-Decter (RAT FILM, FRAUD, DAVID) join us to talk about working with the leading edge group of artists who make up YACHT, their willingness to embrace the possibility of failure, and exploring the benefits, pitfalls and inevitability of Artificial Intelligence in our daily lives.

For more go to: memory.is

About the filmmakers – Sebastian Pardo and Riel Roch Decter founded  MEMORY  at the start of 2014 and together have produced and distributed award-winning fiction and non-fiction films. They have collaborated with multi-hyphenate filmmakers and artists to bring their debut films to fruition, such as: Celia Rowlson-Hall’s MA, Carson Mell’s ANOTHER EVIL, Dean Fleischer-Camp’s FRAUD, Theo Anthony’s RAT FILM, Marnie Ellen Hertzler’s CRESTONE and Zia Anger’s MY FIRST FILM project. In 2016, MEMORY was named one of Filmmaker Magazine’s 25 New Faces of Independent Film, and in 2020 MEMORY was awarded the Cinereach Producing Award for their work in “shaping new ways of filmmaking.” MEMORY’s latest production, Theo Anthony’s ALL LIGHT, EVERYWHERE won a Special Jury Prize for Non-Fiction Experimentation at Sundance 2021. THE COMPUTER ACCENT, which world premiered at CPH:DOX 2022, is their debut feature film as a directing team.

About the subjects – YACHT began in 2002, as the design studio Young Americans Challenging High Technology, but the group is neither young nor American. For 20 years, Jona Bechtolt, Claire L. Evans and Robert Kieswetter have shape-shifted through multiple lineups and musical styles, releasing albums internationally on DFA RECORDS and DOWNTOWN RECORDS. YACHT have created and sold unplayable compact discs, published a philosophical handbook, built a 62-foot video installation for Dolby, designed an eyewear collection, created a fragrance, campaigned against NSA surveillance, programmed large- scale public art activations, and have been commissioned to speak, curate, and perform by organizations including THE GETTY CENTER, ADOBE, TEDx, WIRED, MOMA LACMA, RHIZOME,  VICE, and more. Their seventh album, Chain Tripping,  was nominated for a GRAMMY Award for Best Immersive Audio Album.

“The Computer Accent helps illustrate the prospective uses of AI, along with how much, much further it has to go.” – Dan Schindel, Hyperallergic

“But Accent is less about the end product than their process. Which you will find interesting most likely to the degree that you are interested in pondering the eternal questions of art vs. technology…” – Dennis Harvey, 48 Hills